A History of Lighthouses

A lighthouse is a tower with a bright light on the top. It helps warn sailors of dangerous areas and serves as a navigational aid that helps to keep ships and boats safe. A light station includes the lighthouse, the keepers’ house, and other structures. These buildings helped lightkeepers carry out their duties. 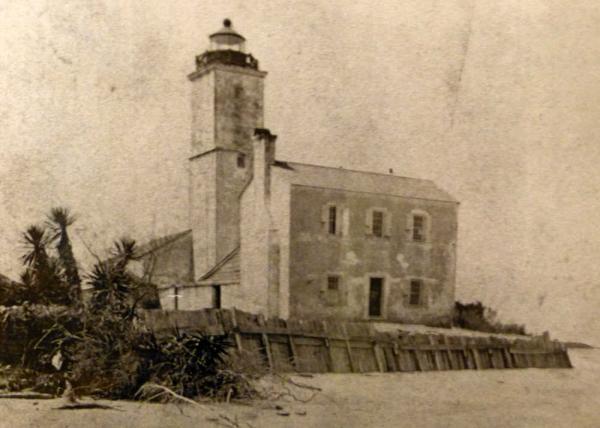 When the Spanish settled in St. Augustine in 1565, they built wooden towers along the coast to defend the city. It is possible that Spanish soldiers used bonfires to light their watchtowers; doing so made the watchtowers an early form of a lighthouse. No evidence of them remains today. In 1737, the Spanish used coquina to fortify the wooden watchtower on Anastasia Island. When the British took over Florida, they made the wooden watchtower taller. They also may have used bonfires to light the tower. A keeper’s house was added to the watchtower when Florida became a part of the United States. This became Florida’s first lighthouse and first light station. 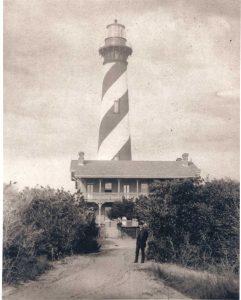 In 1870, the Lighthouse Board decided that St. Augustine needed to construct a new lighthouse. Land erosion threatened the coquina tower. In 1874, keeper William Russell lit the lamp in the new lighthouse. The lighthouse stands 165 feet tall. The daymark is a black and white spiral on the tower with a red lantern on top. Ships near the shore used it as a landmark during the day. Until 1936, the ligthkeeper carried oil up 229 stairs to keep the light lit. After 1936, the lighthouse became electrified. The US Coast Guard automated the lighthouse in 1955. Keepers and their families no longer needed to live at the light station.

An important part of the lighthouse is the Frensel lens. The lens is made of many prisms that are mounted in a steel frame. The lens arrangement makes light from the lighthouse lamp act as one strong beam. The St. Augustine lighthouse has a first order Fresnel lens and uses a 1000 watt bulb. The lens consists of 370 hand cut glass prisms. They are arranged in a beehive shape that is 9 feet tall and 6 feet in diameter. The nightmark is one fixed white flash every 30 seconds, which can be seen up to 24 miles away. It is used after sunset because nighttime is the most dangerous time for ships to navigate.

Daymarks and nightmarks make every lighthouse unique. The daymark is the paint color and pattern on a lighthouse. The nightmark is a distinctive light pattern that is fixed and flashes or rotates and flashes. Each distinctive daymark and nightmark can be seen from the sea and are used by sailors so they know where their ships are located along the coast.