What Is a Shotgun?

From Investigating a Shotgun House, Introduction

In cities, land developers usually subdivide a  property in order to fit as many lots on it as possible. This maximizes the amount of money the land developers can make. Narrow and often deep lots are found in many cities across the United States, and these types of lots are ideal for the construction of shotgun houses. 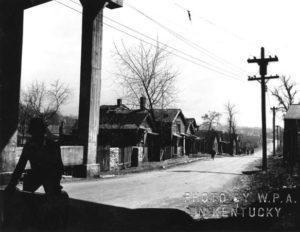 The shotgun floorplan likely originated in West Africa and Haiti, and spread via New Orleans throughout the United States (Vlach 1986). American shotguns, found in both urban neighborhoods and rural areas, have a long history that “extends back at least to the sixteenth century” (Vlach 1986:59). The name comes from the distinct form of the house and the story of firing a shotgun aimed through the front door. The bullet would presumably travel straight through the house unimpeded, from one end to the other (Wilson 1974:71).

Shotguns are rectangular houses: one-story high, one-room wide, and two to five rooms deep. Though shotguns can be built of brick, stone, or wood, most urban examples are wood frame structures. Cheap, easy-to-build framing methods (called balloon frame and box frame) customarily used in outbuildings and smaller houses are the most common shotgun house construction methods. These types of wooden buildings, like the shotgun houses in Davis Bottom, have thin walls with no cavity for insulation. 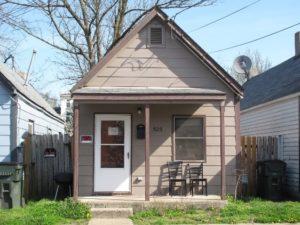 Builders constructed shotguns on piers–wooden posts set into the ground to bear the weight of the structure. Pier foundations are ideal for use in settings where a house needs to be built fast and cheaply, and in frequently flooded areas, like parts of Davis Bottom.

Initially, wooden shotgun houses had exteriors covered with either weatherboards or board and batten. Later builders used synthetic materials, such as rolled asphalt or vinyl siding. These houses were not weather tight. Nailing layers of wallpaper or newspaper to the inside walls, in addition to brightening up the inside, would have helped keep out drafts in the winter.

Rooms in a shotgun, often around 12 to 15 feet wide, line up, one after another. The typical shotgun does not have any hallways. The front door is its main entrance. Most shotguns have a front porch and usually a rear porch, too. In warmer weather, a porch served as another room. 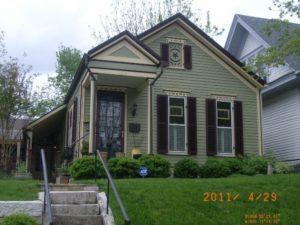 The front of a shotgun has one to two windows and one door. Sometimes the door is located in the center, with a window on either side. More often, though, the door is offset, with the window(s) to one side. Typically, the front porch has a shed roof (only one slope) or a hipped-roof (four sloped sides) and extends completely across the front of the building. If a builder intended to add special decoration to a shotgun, it would occur on the front porch. This decoration might take the form of turned (on a lathe) porch posts or decorative brackets along the roof edge.

A centrally placed chimney was usually the heat source for a shotgun. It was most often located in the front room, which served as a parlor or living room. This was the most public and nicest room in the house. Here families commonly set out their “best” things. In addition to a fireplace, this room might have a nice mantle. It also might be the only one with decorative detailing in the wood around doors and windows. The chimneystack had an opening in the front room. Sometimes it would have one in the middle room as well, which served as a bedroom. The back room–the kitchen–had its own heat source, such as a stove hooked up to a flue. 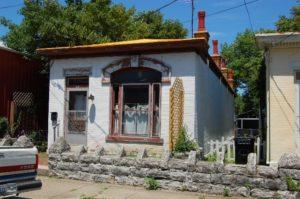 Late-19th-century shotguns typically did not have plumbing or a bathroom. In the 20th century, residents or property owners added shed-roofed rear bathrooms or enclosed a back porch for this purpose.

Where houses sit on urban lots is very important. Because of the narrow and deep lots, often no more than 28 feet wide and 80-100 feet long (Kellogg 1982), a shotgun took up most of the lot. There was little to no front yard because the shotgun typically sat at the front of the lot.

A little bit of space at the rear of the lot contained a privy, often a cistern, and perhaps a wood shed and a storage shed. These structures (with the exception of the cistern) were inexpensively built of wood, with little to no framing of the walls and roof.

Are there shotgun houses in your community?