From Investigating a Shotgun House, Part One: Geography

Davis Bottom is different from Lexington’s other urban, working-class neighborhoods. That is because throughout its long history, black people and white people lived side-by-side as friends and neighbors. Let’s meet members of two Davis Bottom families who lived on DeRoode (pronounced duhroad-ie) Street.

When Kenny, Cissy, and Mary heard about the Davis Bottom History Preservation Project, they brought in family pictures to share. Through their videotaped oral history interviews, you can hear them talk about what it was like to live in Davis Bottom. Learn even more by reading their biographies here. 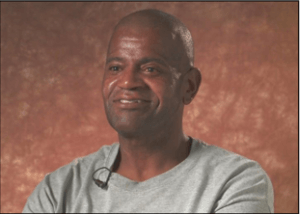 Kenny’s was a big family. He had a twin brother, four other brothers, a half-brother, and a sister. He grew up surrounded by aunts, uncles, and cousins who also lived in Davis Bottom. When Kenny was a child, he spent a lot of time at his grandparent’s house at 728 DeRoode Street.

The Demus Family lived in several rented houses in the neighborhood when Kenny was young. One of the places they rented was a shotgun house.

It was a lot like 712 DeRoode Street, the Davis Bottom Shotgun House Site in the Investigating a Shotgun House. It had three rooms and a wood-burning stove. All the boys slept in the same big steel-frame bed. There was never any argument about where to sleep. Each boy knew his spot on the mattress. The family used an outhouse, and at night, they kept a little pot in the corner of the bedroom. During the time they lived there, their landlord had a bathroom added to the house. Thank goodness, with such a big family!

As a child, Kenny ran errands for grownups. Carrying a note, he’d walk to the store to get things like a pack of cigarettes. He played with friends in “The Jungle,” a wooded area on the steep hillsides below the train tracks. They build forts out of tree limbs, old blankets, old tires–anything lying around would work.

Kenny remembers how, if he misbehaved out of sight of his parents, they somehow knew all about what he had done when he got home. Once, Kenny snuck into a yard in the neighborhood and stole peaches and apples off the trees. Because he ate the “evidence” as he walked home, he felt proud of himself for getting away with it. But when he arrived, his father wanted to know why he had stolen the fruit! 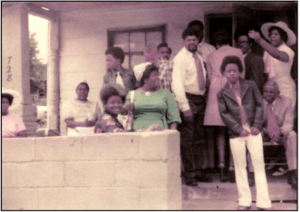 Demus Family on the front porch of 728 DeRoode Street in the 1970s.

From first to fifth grade, Kenny walked the short distance to Carver Elementary. He loved Carver. Lexington integrated its public schools when Kenny was in sixth grade. So, as he later would for junior high and high school, he had to go to school outside of Davis Bottom. He took a school bus across Lexington.

Teachers and students looked down on Kenny because he lived in Davis Bottom. They said nothing good ever came out of his neighborhood. They let his poverty in material things cloud their judgment about him. It was hard to go to school and learn in a place like that. Kenny taught himself to read, because he did not learn to in school.

When Kenny was a teenager, he got a job cutting and hanging tobacco. He graduated from high school and soon afterwards, took a job with the City of Lexington as Director of Southside Park. He held that job for 17 years, until The City closed the park.

Kenny married and moved to another Lexington neighborhood. Kenny and his wife had three girls– Ken-nisha, Ken-nae, and Ken-yale–and a boy, Kenny, Jr. After Kenny became a single parent, he and his children moved back to his old neighborhood to live for a while. They lived in a shotgun house near his parents, who helped him take care of his kids. His children were upset about moving to Davis Bottom. They knew what people in town thought of people who lived there. Kenny told them, “It’s not where you live that counts. It’s how you choose to live.”

Today, Kenny works for the Lexington Public Schools as a bus driver. His children are grown and in college. He lives in an apartment near Davis Bottom. Once the City of Lexington finishes building the roads and new houses as part of the Newtown Pike Extension Project, he hopes to move back to his old neighborhood.