From Investigating a Shotgun House, Part One: Geography

Yesterday, you heard the story of Mr. Kenny Demus and today you get to learn about the Laffoon sisters’ experience growing up in Davis Bottom.

Cissy Laffoon and her older brother PeeWee were born in Marble Creek, Jessamine County, Kentucky. When Cissy was about three years old, she and her family moved to Lexington. Mary Laffoon was born in Lexington when they lived in the nearby neighborhood of Irishtown. Cissy was six and Mary was three when they made the short move to 848 DeRoode Street in Davis Bottom in 1953. 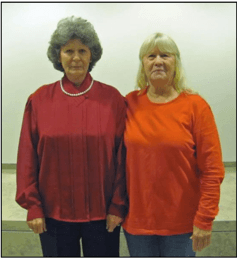 Both of their parents had been married before, so Pee Wee, Cissy, and Mary have nine other brothers and sisters. When Mary was six years old, their parents divorced. Their father moved a few streets away in Davis Bottom. The girls, their brother Pee Wee, and their mother stayed at 848 DeRoode Street.

When Cissy and Mary were young, their family lived in many different rented shotgun houses throughout Davis Bottom. Their mother was trying to save every dollar she could. Cissy and Mary remember sleeping together in a big bed in the living room of their two-room shotgun house. To try to insulate the house, their mother nailed up sections of cardboard boxes and pages from the newspaper on the walls and ceiling. She painted the nails different colors. From their bed, the girls often played a game of searching for words in the newspaper on the ceiling.

Cissy was a tomboy and always getting into trouble. She had many scraped knees. She stole the boys’ bicycles and rode all over the neighborhood. Mary was always the littlest and the youngest of the kids who played together. The girls loved to walk down to the end of DeRoode Street where someone had tied a swing on a tree. They’d jump out of the swing onto a mattress. Cissy also liked doing cartwheels and rolling downhill. Starting at the top near the West High Street Viaduct, she would roll all the way down, ending up at the bottom, in Southside Park. The girls tried not to get hurt, because they knew their mom did not have the money to take them to the doctor. Cissy remembers when she got sick, her mother used “old home cooking” medicine. For cuts and scrapes, her mother rubbed on liniment that came in a can. 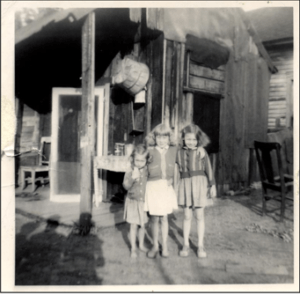 Mary Laffoon (left), Cissy Laffoon (center), and a friend (right) in front of the back porch at 848 DeRoode Street in the mid-1950s.

White children in the neighborhood went to school at Lincoln Elementary. It was only about a block away from Cissy and Mary’s home at 848 DeRoode Street, so they could easily walk to school. They attended first through sixth grade there. Cissy and Mary loved going to Lincoln. The food was good. Their teachers were nice. They did not want to leave.

There were no junior high or high schools in Davis Bottom. Because there were no school busses, the girls had to walk many blocks or take a city bus. These schools were very different from Lincoln. They were not welcoming places. Teachers and students looked down on Cissy and Mary because of where they lived. It was hard to go to school and learn there. Mary said if she could have kept going to school in Davis Bottom, she would have stayed in school. Both girls dropped out of school when they were 16 years old.

Cissy married soon afterward and became Cissy Head. She had two sons: Steve and Tim. Mary married and became Mary Pollard. She had two boys, too: Les and Scott. Mary and Cissy lived with their families in Davis Bottom for many years, and on several different streets.

Cissy and Mary were homemakers, and went to work outside the home after their boys were older. Cissy worked in many different jobs: at the nearby Red Mile Race Track’s track kitchen, and cleaning commercial buildings. When her boys were young, her family also had a paper route. Cissy, now divorced, has owned her own house cleaning business for many years. Mary worked at the dry cleaners, the R.J. Reynolds Tobacco Co. redryer, and other factories. Mary, a widow, is retired now.

Eventually, Cissy and Mary moved away from Davis Bottom to other parts of Lexington. However, they hold fond memories of their friends, the games they played, Southside Park, and their old neighborhood. Cissy and Mary want to see their old neighborhood thrive again. They are hopeful that the new homes and the road that The City has planned for so long, Newtown Pike Extension, will be finished soon. Mary said she might move back. She knows it will not look the same as her old neighborhood. The houses will not be shotguns. The streets will have sidewalks. But it will be home.