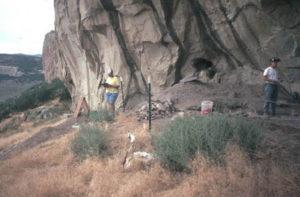 A rock shelter is a wide and shallow cave or a protected area created by a rock overhang that provides a natural shelter. Rock shelters provided dry places for people to live for a few days, months, or even for years. The rock shelters were warm in the winter and cool in the summer. Rock shelters vary in size, some a small and others are quite large.

In Investigating a Rock Shelter,

students meet Clifford Duncan, a Ute tribal elder. Two hundred years ago, Clifford Duncan’s ancestors used rock shelters for hunting camps. They were a place for vision quest (a personal journey to find an idea or dream to guide oneself through life) sites. Rock shelters gave temporary shelter from the rain, snow, and wind. As Clifford Duncan describes, “Some rock shelters were used overnight. Some were used longer. It all depended on the type of activities in which these people were involved at the time … These people already knew about the rock shelters in their area. It is not something that they happened upon. They knew about the rock shelters since they lived there. They had been living there for thousands of years.”
Often, people who lived long ago also used rock shelters as a place to record important events. They drew on the walls of the shelter to tell about their lives. They used ochre or charcoal to draw on the walls. The Red Army Rock Shelter site, is home to a large rock art panel. Clifford Duncan describes the panel as depicting a Bear Dance, a spring celebration. “There are two animals on the lower portion of the panel. I think one of them is a bear. The bear is chasing the otter… The Utes consider the bear to be its older relative and the older relative takes care of the Ute. Symbols like the bear paw actually tells you that there were Utes there.”

Can you find the otter and bear on the Red Army Rock Shelter Panel pictured below?