Boats are something humanity has had in some shape or form for thousands of years. Ships allowed for consistent trade between not only cities in the same country, but between entire nations across rivers, seas, lakes, and oceans. Boats developed from simple rafts into sailing vessels that could move upwards of 30 knots towards any heading regardless of wind direction. Though sailing and sailboats can be intimidating, learning how sailboats happened helps to shed light on human ingenuity as well as ancient trade, warfare, and the spread of different cultures across the world. 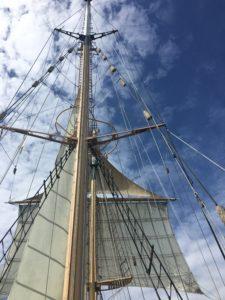 Boats in the ancient world were usually made from plant material like reeds, bamboo, or wood as well as stretched animal skins. These materials break down quickly and easily, so they are not well preserved in the archaeological record. This makes it difficult for archaeologists to pinpoint when the building of boats began, but archaeologists know that by 3000 BCE, Egyptians were building sailboats out of wood to travel the Nile and Mediterranean. These first boats would have been simple. Later, boats developed sails that allowed the use of wind power over manpower.  Some archaeologists theorize that the oldest boats are likely 16,000 to 21,000 years old. These scientists support the Coastal Migration Theory that posits humans traveled by some sort of boat or raft from Asia to America far earlier than the conventional idea of migration via the Bering Strait.

Early sailboats had one mast with square-cut sails that could only sail when the wind was directly behind them. Ancient captains also used rowers who were responsible for physically rowing the boat in the proper direction whenever the wind would not allow it to sail. This method of sailing downwind and rowing against the wind continued for quite some time in the Mediterranean world. The exact timing is unknown, but archaeologists do know that at some point in the 1st century CE, the Greeks began using sails that allowed for tacking and jibing—technological advancements that are believed to have been introduced to them by Persian or Arabic sailors. Tacking and jibing and similar sailing maneuvers that allow a ship to adjust their sails to continue sailing in the preferred direction even if the wind changes, eliminating the need for rowers. Sailboats are very complicated pieces of equipment, and their development did not happen all at one time, but rather certain pieces advanced in different stages with different cultures.

Fun Fact: The speed of a ship is measured in “knots.” This term came from an old method of figuring out speed to calculate one’s geographic position by tying knots at even intervals on a line, tossing it in the ocean with a weight on the bottom, and measuring how many knots left the ship in a certain amount of time. The number of knots that left the ship was how fast it was going! 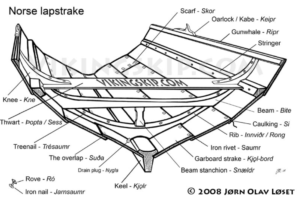 The shape of a sailboat is usually a cross between a “u” and a “v” shape though this was not always the case. The bottommost point of a ship is called a “keel.” Sailboats were once made of long timbers with the keel being the central bottom beam. This “v” shape was key in making ships balanced and prevented the boat from tipping. The deeper keel also increased speed as it’s hydrodynamic can cut through the water. This invention of a central wooden beam and a pointed keel is attributed to the Vikings. Thanks to the deeper keel, their drekars, or longships, were much more stable and maneuverable in the water.

Fun Fact: Sailors use the terms “port” and “starboard” for left and right, which are also color-coded into red and green, respectively. Here is one trick used in modern times by new sailors to remember correctly: port is also a red wine and the star in starboard is like Starbucks, which has a green label 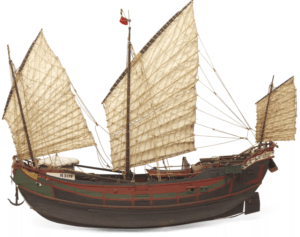 Though mounted steering feels like a given today, it wasn’t always so in the ancient world. Before any sort of steering was fixed to the ship, sailors had to hold the rudder, usually an oar, to steer the ship. The first known fixed steering vessel is from the Han Dynasty in China. Chinese “Junk” ships had rudders and were arguably the most advanced boats for around one thousand years due to their immense size, speed, strength, and maneuverability. These types of ships were so powerful and large that they could easily traverse entire oceans—the most famous example being the journeys of Admiral Zheng He. It took the West another 1000 years to invent this type of fixed rudder due to the lack of communication between China and Europe.

Fun Fact: Polynesian sailors used many methods to understand where they were on the ocean, but one of these methods is a stick chart. These charts were created using stick roots, and other fibers to map out the ocean. They served as navigational tools for experiences sailors who made the charts to show wave patterns around islands, island positions, and other visuals to help navigate through the ocean. 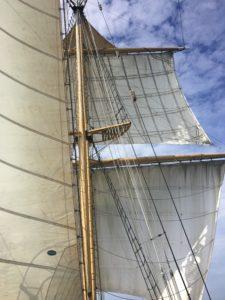 Full sails on a tall ship

Originally, sailboats only had square sails, but eventually triangular, or lateen sails, were developed. Their triangular shape allows for a greater number of sails to fit on a boat and all catch the wind at the same time. Lateen sails allow for more advanced sailing maneuvers, like tacking and jibing. Tacking and jibing are two methods that zig-zag a ship to catch the changing wind better. In the past, square sails restricted a boat’s movement in the same direction as the wind. Lateen sails can be moved from one side of the ship to another, allowing a captain to move them to accommodate any new wind direction without the ship going the wrong way. This invention didn’t need rowers or the captain to rely exclusively on certain seasonal winds and travel, but rather to go anywhere at any time. The lateen sail is perhaps the most important sailing invention as it allowed people to travel easily across seas and entire oceans, exploring new lands.

Some of the most famous sailors are the way finders of Polynesia. The inventions covered above were not used by these sailors, who had their own creations. These creations allowed them to colonize islands thousands of miles apart incredibly quickly. Way finders relied on outrigger canoes that were exceptionally fast and durable. These boats usually had two canoes with a platform on top to connect them. They could have several sails and were also capable of holding not only people, but also domesticated animals and provisions for long journeys. Polynesian sailors also invented complex ways of using stars, the sun, and the moon for incredibly precise navigation that eventually allowed them to find islands as remote as Rapa Nui, or Easter Island. 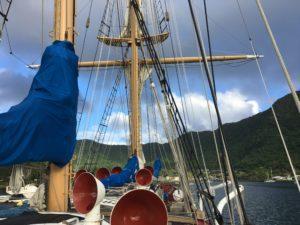 The archaeological record of sailing is difficult because wood, metal, and textiles do not survive very long underwater. However, some shipwrecks can be preserved for hundreds of years! Maritime, or underwater, archaeologists carry out these excavations. These archaeologists specialize in unearthing artifacts and sites that are underwater, like shipwrecks. There are many famous shipwrecks, like the Clotilda, Titanic, Mary Rose, Vasa, and Queen Anne’s Revenge. These shipwrecks are incredibly valuable for archaeologists to study because they preserve the artifacts and technology of the time period in which they were built and sank.

Ships have evolved a great deal through time. They started with simple reed boats on the Ancient Egyptian Nile and developed into outrigger canoes that allowed way finders to colonize islands as far away as Hawaii then finally to modern-day cruise ships that can transport thousands of people. How did they happen? The best answer is probably the need to move across bodies of water as well as the deep human desire to explore and discover.