Mozzarella, gouda, Brie, provolone, pepper jack, camembert, and queso blanco are among hundreds of cheeses found worldwide are made and enjoyed every day. The rate at which we eat cheese is astonishing. In 2019 alone, the European Union consumed 9458 metric tons of cheese. The diversity of cheese demonstrates the complexity of the craft and dedication cheesemakers have to their craft. With such an important place in the culinary industry and the diet of millions, it makes you wonder: how did cheese happen? 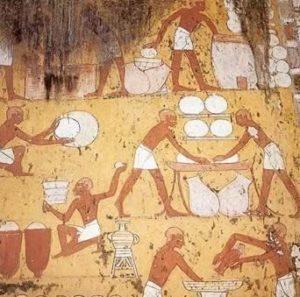 Why can humans eat cheese? Our love for this dairy product is abundant and well recorded, but technically we should not be able to digest it. Humans do not need milk past infancy, so why do we elect to consume it? Lactose intolerance is common globally, especially in South America, Africa, and Southeast Asia. One theory suggests that lactose tolerance was a selected gene mutation among Europeans thousands of years ago. In this colder climate, where food would be scarce for a significant part of the winter, access to milk from domesticated cattle remained plentiful and provided much-needed calories to avoid starvation. These individuals increased their fitness with the ability to drink milk into adulthood and passed on this mutation to their offspring. As a result, European decedents are less likely to be lactose intolerant.

Cheese in the BCE 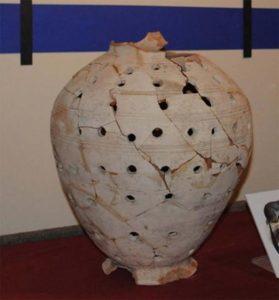 Some of the oldest cheese ever found dates back to 7000 BCE. This means cheese predates recorded history. This cheese was found in Croatia’s Dalmatian Coast. The analysis of pottery linings suggests they stored cheese. Other holed pottery found in Switzerland are believed to be used for straining cheese. While the evidence for the world’s earliest cheese is still up for debate, the formerly oldest cheese was discovered in Poland and dated to 5,500 BCE. With ancient cheeses found in several different regions, it is important to note that archaeologists and other scientists have not concluded a place of origin for cheese.

How did they make cheese back then? Cheesemaking likely began with salting curdled milk that was kept in animal skin or animal organs. The climate it originated in explains a geese’s salt content. For cheese makers in the Sahara, a higher salt content was required to protect the cheese from spoiling. In Europe, where it is colder, salt was less necessary which allowed cheese to age longer and adopt a new flavor profile.

The earliest cheeses would have been very different from the cheese we know and love today. Based in curdled milk, early cheese would have closely resembled modern cottage cheese, or an early form of feta.

While cheese is renowned for its flavor and profile, it was also famously present in numerous myths and other ancient stories. At the beginning of cheese itself, there is a middle-Eastern story of an un-named traveler who carried milk. While traveling in the hot sun, he went to take a drink to find the milk had separated into curds and whey- and cheese was born. I wonder if this is where the ‘accidentally leaving milk out on a hot day’ origin story came from? 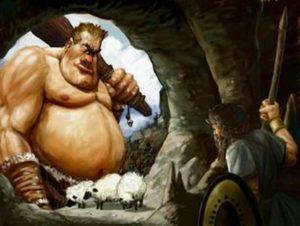 The cyclops in Homer’s Odyssey, who was very fond of sheep and goats, was known to possess huge stores of cheese in his cave. Odysseus himself exclaimed at the sheer amount of cheese when they entered the cave. They also recorded the care the cyclops took to milk his ewes and process the whey after shepherding the flock.

Did anyone ever tell you the moon was made of green cheese? You are not alone. ‘The moon is made of cheese’ story is an exceedingly popular spoof. How this story spread is a mystery. Some say it began with a trickster fox convincing a hunter the moon was actually cheese, and to pursue that instead. While it is doubtful anyone ever believed the myth, NASA took advantage of its popularity in a well-executed April Fools Prank in 2002.

Cheese has become such a prolific food that it often has regulations and to protect its tradition and quality. Regulations are especially important with the mass production of cheese and the increasing diversity of cheeses. This diversity took off after the roman empire when cheese making was considered an artisan craft. In the grand timeline of cheese, gorgonzola is one of the earliest invented in 879 CE. Cheddar and parmesan were not invented until the 1500s. As cheese diversified and popularized itself, it worked its way up to becoming a luxury item and demanded attention from culinary experts and board standards. Even though these kinds of cheese boards are less tasty, they are responsible for mass production of cheese and the formation of dairy associations. They are part of the reason why cheese is so accessible. However, this growth also started a feud between factory made cheese and other ‘real’ cheeses that persists today. 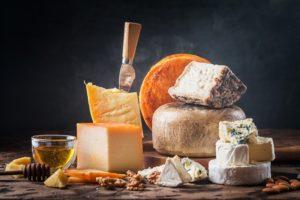 Cheese has been a key part of human cooking for millennia. It is a unifying food enjoyed daily or on special occasions and brings flavors of different cultures across borders and time. This influential industry is there for those who crave a salty snack or have a wicked sweet tooth. Cheese has successfully infiltrated all corners of the culinary industry and is found independently, in baked goods, on pasta and salad, and in the humble sandwich. It is difficult to imagine a world without cheese, or what many foods would look, and taste like in its absence. The next time you take a bite out of your cheese of choice, keep in mind its unique history and the wonders cheese has brought to the world.