Can an Assistant State Archaeologist use Project Archaeology? The answer is, “YES!”

Rebecca (Becca) Simon is the Assistant State Archaeologist in the Office of Archaeology and Historic Preservation at History Colorado. Growing up in Washington, D.C., Becca visited the Smithsonian often and fell in love with history and archaeology. Becca’s experience includes teaching, interpretation, collections management, and cultural resource management. She has field experience in Colorado, Wyoming, Utah, Kansas, and southern Jordan. Her interests include Southwest archaeology, the protohistoric era, public outreach, preservation, skiing, ultimate frisbee, roller derby, and most importantly her dog, Minnie.

At some point between December 2007 and the end of January 2008, I was sitting in my tucked away office above the loading dock of the National Museum of Natural History. I was an intern for the former illustrations researcher of the Handbook of North American Indians and emeritus anthropologist, Joanna Scherer. I spent most of my time deciphering curly-cues and squiggles of ethnographic field notes from the turn of the twentieth century. Joanna walked in one day and handed me a flyer one day and said, “You need to do this” (I am 5 foot 11 inches, but her 5 foot something-self was not to be messed with). The flyer gave details of a “facilitator workshop” by Project Archaeology. I didn’t really understand what Project Archaeology was beyond “educational” and having to do with kids. Prior to making the leap into archaeology professionally, I worked for nursery schools and after-school programs for almost ten years and had a lot of hands-on experience with education. Knowing that I ran from the office each day to go to my second of three jobs at the after-school program, Joanna made the easy connection. I don’t think either of us thought it would be life-changing, but it kind of was. 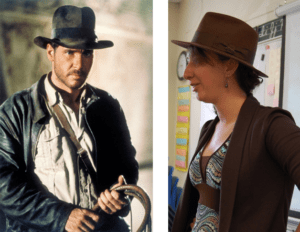 “Do I look like an Archaeologist now?” – (My take on the “What do you think and Archaeologist looks like?” lesson, right – Sept 2013, left from https://en.wikipedia.org/wiki/Indiana_Jones)

In February 2008, I received my “Project Archaeology Facilitator” certificate learning the curriculum, Investigating Shelter, in a draft form (the book wasn’t published until 2009). During that workshop, I learned there was a very direct way for me to use my crudely acquired education background and my passion ​to be an archaeologist AT THE SAME TIME. My mind was slightly blown, but not particularly forward-thinking. So for a few days, I thought I was going to make some big moves, but the reality was I went back to deciding if it was an “s” or an “f” and didn’t think about Project Archaeology for a couple of years.

Getting a job in archaeology is not easy. I have been fortunate to be at the right place at the right time with the right email address on several occasions. Making the move from Washington, DC, to Colorado involved a lot of faith and luck. I hoped I was going to become a technician for some company or public agency to travel around doing archaeological surveys and excavation before Wal-Marts and pipelines were built. What I didn’t know is that I would end up with a company intricately connected with Project Archaeology.

Colorado archaeologists have a long history of promoting Project Archaeology by providing data for curricula, fieldwork opportunities, and training workshops. From 1995 to 2001, at least one teacher workshop occurred every year. In 2007, teachers excavated a rock shelter at the Red Rose Site as part of an education program coordinated by Project Archaeology, the Bureau of Land Management, local educators, and archaeologists from Metcalf Archaeological Consultants, Inc. Two years later, I got my first full-time job in archaeology with Metcalf. That same year, teachers from northwestern Colorado, northeastern Utah, and southwestern Wyoming participated in a two-phase professional development program that included a “mini teacher field school,” where teachers spent four days excavating at a site in northeastern Utah as part of the Metcalf’s portion of the Kanda Lateral Pipeline project. I wasn’t a part of the fieldwork for that project, but working for Metcalf, I realized that I could use my facilitator training in my professional life. 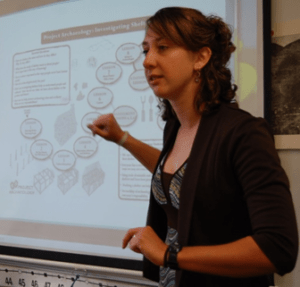 Teaching a  PA workshop in Ouray, CO as a part of my graduate project – Sept 2013

Flash forward eleven years. I have lived in four different cities. Been a part of projects documenting sites from 10,000 to 50 years old. I now work for History Colorado (also known as the Colorado Historical Society) as the assistant state archaeologist in the Office of Archaeology and Historic Preservation. Our office includes the state historic preservation office (SHPO), state archaeologist (and by default state paleontologist), and the main state database for archaeological, historical, and paleontological resources in Colorado. My position is part of the “Office of the State Archaeologist” that exists because of the Colorado Historical, Prehistorical, and Archaeological Resources Act (CRS 24-80-401 to 410) originally passed in 1963 and amended in 1973. Locally known as the “State Antiquities Act,” the law mandates that, “the office of state archaeologist shall be to coordinate, encourage, and preserve… the full understanding of this state’s archaeological resources…” The law lists twelve specific duties including recording sites, issuing permits, and being a liaison between local and federal agencies; but also states that the office is “to work for the maximum beneficial conservation of the archaeological resources of the state of Colorado and the acquisition and dissemination of knowledge pertaining to archaeology.” Which is legal-speak for, “provide educational outreach.”

My job basically splits into three parts: run the permitting program for anyone wanting to do archaeological or paleontological fieldwork (survey, testing, full excavation) on state lands, run a program called “PAAC” (the Program for Avocational Archaeological Certification), and support all the other History Colorado programs as appropriate. The first two are my priority, but those often lead to or impact other History Colorado programs (e.g. the State Historical Fund, State Register Act designations, exhibits, and Archaeology and Historic Preservation Month).

PAAC is a mutually beneficial educational program for avocational and professional archaeologists. Established in 1978, participants obtain formally recognized levels of expertise outside of an academic degree program. The program also facilitates public service, education, research, and the protection of archaeological resources in Colorado.  PAAC complements, but does not replace, existing university and governmental training programs. When I started on August 1, 2018 (Colorado Day – when Colorado became a state), I received the task of bringing PAAC into the 21st century with content, distribution, and collaboration. 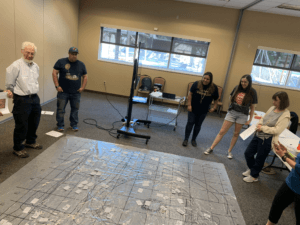 The most direct way I use Project Archaeology in my job is by using the lessons in PAAC.  As part of Investigating Shelter, Project Archaeology developed an electronic database of shelter investigations available to educators through the website. The “Rock Shelter” module, specific to Colorado, Utah, and Wyoming, uses data from the Red Army Rock Shelter, a site in northwestern Colorado excavated by Metcalf in 1994. The “Basin House” is the Blue Knife Site excavated by Alpine Archaeological Consultants, Inc. and “Puzzle House Pueblo” is the Puzzle House Pueblo excavated by Dr. Jim Judge from Fort Lewis College. There are already three sites in the state of Colorado that have synthesized data put into an interactive lesson format where I don’t have to stand in front of people for 20-hours lecturing. Trust me, everyone is better off this way. The lessons say they are for 4th to 6th grade, but with the right approach, mindset, and willingness to do a tiny bit of research, these lessons have been successful in getting higher-level understandings to groups of people ranging in age from 13 to 70+. Again, trust me… no one wants me lecturing for 20 hours.

Indirectly, I use Project Archaeology for its network and its philosophies. Being connected to the national office since graduate school has shaped my approach to anthropology, archaeology, education, and life. Even when struggling through learning the basic chords for the Cranberries song, “Zombie”, I think about the people I met through Project Archaeology and the mutual support we give each other (in case you are wondering, Leadership Team meetings can be very musical). From working with Project Archaeology, I have adopted a few mantras when it comes to doing archaeology, specifically “Public Archaeology.” Public archaeology is not just about archaeologists presenting their work to non-archaeologists, but about putting “people first” and showing how archaeology can “improve people’s lives”. In the midst of greater scientific professionalism in the field of archaeology, we must remember that we deal with a “public resource” in that archaeologists study past peoples, people are naturally attracted to the discipline in one way or another depending on cultural backgrounds (hint: it’s not always positive – for good reason), archaeology uses public funds, and public policies/laws regulate the processes that make archaeology happen in this country.

Archaeologists often study “other cultures,” and “past peoples,” but for every “other culture,” there is a “my culture,” and for every “past person,” there is someone in the present. Some of the founders of PA once wrote, “To simply show the public what archaeologists do, especially [fieldwork], while omitting the contribution that archaeological research makes to science and anthropology in general, may make it appear that archaeology is nothing more than summer fun in the wilds of America and the rest of the world” (Moe and Letts 1998:29). Project Archaeology with its physical products and network of amazing people allows me to connect the past and present beyond the totally awesome slides that my professors used to get me hooked on archaeology. The deeper understandings created help develop conversations beyond, “Don’t put the parking lot there,” or “You can’t put a second story on that house”. The conversations get back to the people and what their lives entail and what these sites mean to them. Every time I connect people with the past, theirs or someone else’s, I feel like I am planting seeds for appreciation amongst people everywhere. Former Director and BLM Lead of Project Archaeology, Dr. Jeanne Moe, often says that we can save the world with archaeology. My focus right now is the state of Colorado, but I’ll do my part for the world when the time is right.

Teaching a one PA workshop in Ouray, CO as a part of my graduate project – Sept 2013