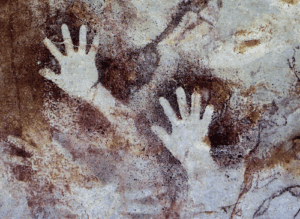 An example of negative handprints. Photo from: http://www.bradshawfoundation.com/hands/index.php

This is the quality of humanity that captivates archaeologists. From medicine wheels to Mesa Verde cliff dwellings to the rock art of Utah, humans have created and left behind incredible works of art and engineering feats. None of those accomplishments would have been possible without the sense of conviction in ones actions, beliefs, and culture. The logo for Project Archaeology embodies that sense through its simple and universal design of two negative handprints.

Art is one way that people can share their ideas, beliefs, and culture. It is also a way that people can share their culture with future generations. Some of the oldest art on Earth can be found by looking at cave paintings. Though there were other forms of artistic expression tens of thousands of years ago, rock art is one of the few types that survives. Caves were a popular type of shelter for people in the past for several reasons: they were easy to protect since they only had one opening, they could be kept warm relatively easily, and they also had walls perfect for artistic expression.

Caves are perfect for archaeologists too. They are usually isolated and well-protected, which means that they  preserve cave paintings for thousands of years. The types of images that decorate cave walls have a massive iconographic range from images of local flora and fauna to abstract symbols to human-like figures that loom large. The one image type that unites almost every culture’s cave paintings around the world is a handprint. 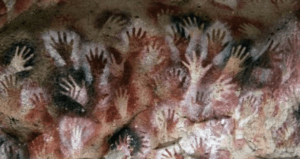 An example of negative handprints. Photo from: https://www.smithsonianmag.com/smart-news/ancient-women-artists-may-be-responsible-for-most-cave-art-1094929/

Handprints are found on the walls of caves all over the world from every time period since humans were capable of producing artistic images approximately 50,000 years ago. These images are found both as filled-in handprints as well as handprint outlines with different types of pigments, which are commonly called a negative handprint since the pigment outlines the negative space around the handprint. People used a combination of materials to draw with, such as carbon from a fire’s ash or ochre, an earth pigment that comes in reds, yellows, and browns. Some of the handprints still sport vibrant colors, even thousands of years later.

These negative handprints are what you see in Project Archaeology’s logo. According to former Project Archaeology director, Dr. Jeanne Moe, when Project Archaeology was created, there was a lot of discussion regarding the logo. They tried a lot of different ideas and designs, and it took a while to settle on a logo that really encapsulated Project Archaeology. The most important message to convey was the human side of archaeology as well as the representation of different Indigenous groups’ cultures across the world. Rather than go with a more typical archaeology symbol like a trowel or arrowhead, a more universal symbol was chosen:  a human handprint. The negative handprint, while a stylistic choice, conveys meaning as well. As explained above, painting handprints on rock faces is a very human action no matter the time period or culture. They are a powerful image that connects modern-day humans to our ancient ancestors. 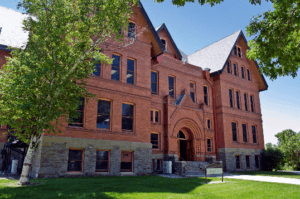 The Bureau of Land Management (BLM) started Project Archaeology in the early 1990s in an effort to stop the looting of archaeological sites in Utah. After the program’s resounding success, it was decided to make it a permanent organization and a partnership was formed with Montana State University in Bozeman while continuing an assistantship agreement with the BLM. Our logo expresses the values Project Archaeology was founded with and continues to uphold: preservation, dedication, inclusivity, and our four enduring understandings: 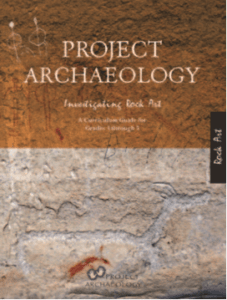 If you are interested in including the subject of Rock Art in your classroom, check out Project Archaeology’s curricula on it here: https://projectarchaeology.org/product/investigating-rock-art/