A warning before you read this blog: Trepanation is a surgical practice that has been used for thousands of years. It involves drilling holes into the skull to relieve cranial pressure. This blog post contains descriptions of the practice as well as close-up photographs of South American skulls with signs of trepanation. This blog also includes a brief discussion concerning the ethics behind the excavation and study of human remains. Because of this blog’s content, it may be inappropriate for younger individuals or disturbing to readers. The practice of surgery is usually perceived as exclusively modern, but ancient medicine has been around for tens of thousands of years. Archaeological evidence shows that ancient surgical practices were not only carried out, but some were effective ways to treat injured people and help them survive. Trepanation is one of these methods. 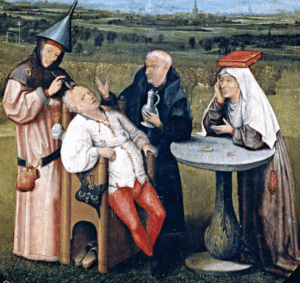 Trepanation is still used by doctors today even though it was a practice used in ancient times. Trepanation relieves pressure built up in the skull, which can be caused by a wide variety of injuries. The act of relieving that pressure on the brain can sometimes be the difference between life and death. Whether or not ancient people understood that there was pressure on the brain is still up for debate, but there was enough medical knowledge and experience to know that it could help someone survive. Based on the archaeological record, scientists believe that trepanation has been around since at least the Neolithic period, which started around 12,000 years ago. Archaeologists can tell if the individual survived the procedure because human bones heal quickly. If the bone around the area is sharp and craggily, it means that there was no bone growth or healing. This individual most likely succumbed to their injuries. However, if the bone around the trepanation hole is smooth, rounded, and a little thinner than the surrounding bone, that means that the individual lived after the procedure long enough to begin the healing process. Trepanation can be found in archaeological records all over the world throughout time. In the oldest finds, trepanation occurs in areas where there were also weapons, violence, or intense hunting. These are types of activities that can create the worst injuries that would need surgery to heal. There is also evidence in these areas that the technique was not pioneered on humans, but rather practiced on animals. Archaeologists have found the skulls of cows with trepanations marks on them, suggesting that they were used for practice before performing the procedure on a person. Though widespread, trepanation is much more common in some areas of the world and time periods than others. It was commonly practiced by the Romans and in other ancient European cultures until there was a steep decline in cases in medieval Europe. In medieval times, medical knowledge and practice were poor and rudimentary because much information was lost in the Dark Ages. Though they had records that detailed trepanation procedures, the conditions were not sanitary and the doctors were not seasoned experts. Because of these reasons, there are far fewer cases of trepanation in medieval Europe. Trepanation was also very common in Inca-era Peru, where many human remains have been found with well-healed trepanation holes. These holes are believed to have been made with ceremonial knives, called tumis, which would be used to pierce the cranium or scrape bone away until a hole formed. Though this sounds dangerous, and it certainly was, it is estimated that the survival rate for prehistoric trepanation was between fifty and ninety percent. 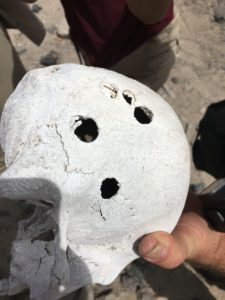 Skull with signs of trepanation from Inca-era Peru.

Trepanation was also not exclusively used for medicine. In fact, there is possible evidence that some cultures used trepanation as a ritual practice and not for any medical cure. Ritual trepanation is difficult to prove because of the lack of written evidence. Still, there are specific markers that suggest that ancient southern Russia had a culture that practiced ritual trepanation. As trepanation is a dangerous surgical practice, it is usually only done with an individual who has suffered an injury. The remains in Russia show no signs of previous injury or sickness. The risk combined with the unusual size of the holes and their placement suggests that these individuals went through trepanation for spiritual belief. Some of these individuals survived after the procedure. These human remains from Russia are the only known evidence that suggest ritual trepanation. Archaeologist know about the history of trepanation because they have studied human remains around the world. Bioarchaeologists are specialized archaeologists who study human bones. There are many ethical considerations that archaeologists must think about before and during their study of human remains. Human remains have ethical implications for those living today, and people have different perspectives when it comes to studying ancient human remains. Archaeology has a long history of not involving descendant communities in their research, but this is changing. When archaeologists and descendent community members collaborate they can create deep and meaningful relationships. There relationships are rooted in communication and respect which is reflected in the research and its outcomes. 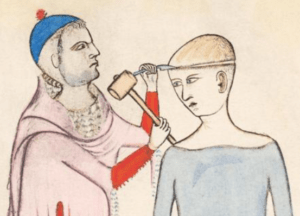 Not only are there ethical considerations but legal ones as well. The Native American Graves Repatriation and Protection Act (NAGPRA) was established in the United States in 1990 to protect the burials of Native America people and outlines a process to repatriate already removed human remains and cultural objects. This federal law provides a process for museums receiving federal funding and Federal agencies to make a full record of their human remains and work to return Native American, Native Hawaiian, and Alaska Native human remains and items of cultural patrimony to descendant communities. It also established rules governing burial sites that include the consultation of descendent community members. For more information on NAGPRA visit: https://www.indian-affairs.org/nagpra-compliance.html A person’s bones hold a massive amount of information not only about the individual’s diet, lifestyle, and culture, but also about the climate, animals, and ecology of the area where they lived. No matter who is doing the research, the decision to excavate or not is different in every situation. Archaeologists think very carefully about these choices and always strive to make the most ethical and scientifically responsible decisions. In the instances when archaeologists do excavate the remains, the individual is treated with the upmost respect and care. If you are interested in bringing in the ethics of human remains into your classroom, please look at Project Archaeology’s Investigating the First Peoples, The Clovis Child Burial. This is a free curriculum that looks at the Clovis Child Burial and the ethics behind it.