A Tool for Any Situation

Medicine is a discipline and science that people have been developing for thousands of years all over the world. Many of the tools that modern doctors and surgeons use in operating rooms today have long histories. In this blog, we’ll discuss some of the most popular tools and materials used in ancient medical practices as well as their modern counterparts. 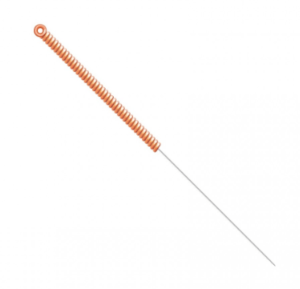 An example of a modern acupuncture needle (Photo from: https://www.acupunctureworld.com/acupuncture-needles/)

“Forceps” is a fancy word for fine tweezers. Many have survived in the archaeological record because they are made of metal. In the ancient world, these were commonly used for non-surgical reasons, such as tweezing hair. Forceps in modern medicine, however, have a range of uses for both surgery and everyday life. Archaeologists commonly find forceps in ancient Greek and Roman homes. Forceps have also been found by archaeologists around the globe, ranging from China to Peru. In addition to serving a cosmetic function for tweezing hair, forceps were also used by ancient doctors to clean wounds and remove pieces of shattered bone and foreign bodies from the site of injury.

Yes, that’s right—everybody’s favorite. Needles display a massive variety in use from alternative medicine to sewing stitches. Ancient Egyptians are considered one of the first civilizations to have and actively develop medical care. Some mummies have neat stitches that close up incisions and display techniques that modern physicians consider quite advanced. Their presence on mummies suggests that ancient doctors were adept and successful at sewing shut wounds on living people too.

Needles also hold an important place in “alternative medicine” that was once common only in East Asia but is now popular all over the world. Practices, such as acupuncture, use needles to tap into areas of energy flow in the body. Aches, pains, and other issues like indigestion were attributed to blockages in this energy that acupuncture helps to release. Professionals would listen to symptoms, consult energy-flow diagrams, and selectively place needles to unblock the energy.

Syringes are a type of needle that is hollow, capable of taking fluids out or putting fluids into the body. Syringes were invented early in medical history by the Romans, who most likely used it with soldiers who were injured during battle. These early syringes were fairly simple. The word “syringe” is Greek in origin and means “tube.” Much later in history, in the 9th century, an Egyptian doctor improved on the design by adding a hollow glass tube.

Scalpels are perhaps one of the most recognizable pieces of medical equipment today. Made of steel and exceedingly sharp, scalpels are used to begin surgery and make cuts. They also have a surprisingly ancient history. Scalpels have been found in the archaeological record as far back as 10,000 years ago. These knives feature small, one-sided blades that have a short handle, just like those seen in modern-day surgery. Scalpels have changed through time, starting with their basic version 10,000 years ago to those used in Roman times, which were constructed from bronze, iron, or even steel.

Metal wasn’t the only sharp material available. Obsidian is a type of rock that is also glass. Because obsidian comes from areas with volcanic activity, archaeologists find obsidian at archaeological sites all over the world. It was popular in the ancient world not only for its beauty but also for its sharpness. Obsidian can be 100 times sharper than the scalpels used today. In fact, obsidian is so sharp that modern surgeons have begun reintroducing it into operating rooms for precise surgeries.

Though tools were used in the ancient world for a variety of medical practices, animals were sometimes used as well. Leeches have been some of the most popular. Bloodletting was widespread for thousands of years and originated in Egypt. The idea behind bloodletting was that releasing blood out of the body would take with it blockages, bad humors, or other toxins that were causing the patient’s symptoms. Allowing some of a person’s blood out would reestablish balance in the body and result in someone feeling better. Though it was usually carried out by making an incision over a vein to produce a flow of blood out of the body and into a dish, sometimes doctors would use leeches to do the job. Bloodletting could also have a spiritual significance, where the blood released was seen as an offering or sacrifice to the gods. This kind of tradition was more common in Central America. Though leeches are some of the only animals that were used as a medicinal practice in their own right, many other animals’ parts were popular treatments or cures for different issues. Common examples include things like crushed rhinoceros horn or elephant tusk, sea turtle shells, or even tiger claws.

Toothaches and cavities are some of the most common medical ailments in the ancient world that are present in the archaeological record. Though ancient diets could be quite restricted, humans have always loved sugar, and without modern brushing and flossing techniques, many people in the past suffered from tooth decay. The oldest drill archaeologists have discovered is from the Indus Valley civilizations and is 9000 years old. These drills could have been used to help isolate cavities, but in some cultures they were also used to create decorative expressions. The Mayans are known for using dental drills for decoration. Archaeologists have discovered many skulls that have teeth studded with different colored jewels, and it is thought to be a practice that demonstrated wealth and social status.

Medicine has, thankfully, come a long way over the last several thousand years, but many ancient cures and techniques have shown to be surprisingly effective. Archaeologists continually discover different ingenious instruments people used to help others. Some of these devices and methods were quite advanced and were effective at solving the medical issue and helping the patient survive longer. From drills to scalpels, these ancient medical tools help archaeologists better understand how people cared for one another.