Medicine Rocks State Park: As Beautiful A Place As I Have Ever Seen

By Sabre Moore, Director of the Carter County Museum 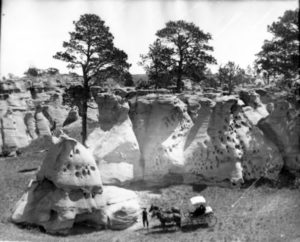 The history of Medicine Rocks extends long into the past, back to times when the area was said to have been used by the Crow, Northern Cheyenne, and Sioux nations for sacred and ceremonial purposes. Euro-Americans referred to the area as The Hole-In-Rock as evidenced by early military maps, including a “War Department Map of the Yellowstone and Missouri Rivers and their Tributaries” made in 1859-60. By 1880, settlers started moving into the Medicine Rocks area, followed by hunters and cattle ranchers.

In 1883 Teddy Roosevelt visited Medicine Rocks (Butte) and is quoted in his journal stating the future state park was “as fantastically beautiful a place as I have ever seen.” In 1919 the first homestead records were recorded in Medicine Rocks State Park area. The purchase of the county land decreased the future park size. Carter County had ownership of the remaining land until the county commissioners deeded the land to the state of Montana in 1957 for a state park.

The main attraction that brings people to the park are the unique sandstone pillars that have historic pictographs and petroglyphs painted and carved on them respectively. The distinctive Medicine Rocks State Park geology is estimated to be between 60 and 65 million years old as it is part of the Fort Union sandstone ridge system that has been eroded into sandstone pillars. Most of the park occurs within the Fort Union Formation and the sandstone shapes found at Medicine Rocks State Park were caused by deposits from ancient tides and sand bars. 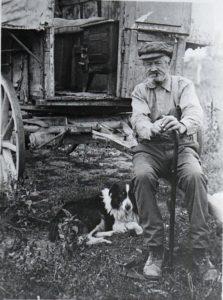 In 2017, Medicine Rocks State Park was inducted into the National Historic of Historic Places for its cultural and natural resources. Rock art and historic inscriptions, many with dates, indicates continual visitation and use of the site. Inscriptions related to indigenous, a few suggesting early 1800 visitation, followed by early Euro-American inscriptions indicating late 1870s-early 1880s settlement of the area, continuing right through to the present cover the sandstone outcrops of the park.

Although a small number of stone rings, rockshelters, a buried lithic component, and a light scatter of lithics are found within the park, petroglyphs, mostly in the form of historic inscriptions, dominate the resources found throughout the park, as well as throughout the immediate region. Although the earliest archaeological remains in the area, dating back to around 11,000 years B.P., are associated with the Mill Iron Site, 28 miles southeast of Medicine Rocks State Park, Medicine Rocks itself has not yet yielded evidence of such antiquity. Artifacts identified at Medicine Rocks State Park indicate the earliest occupation and use to be consistent with the Old Women’s Phase (1050 B.P to 200 B.P in Montana) of the Late Precontact (Prehistoric) Period.

By the late 1800s and into the 1900s, Medicine Rocks became a destination to visit and camp and a popular place to picnic, a role it continues to serve to the present.

In Investigating Rock Art at Medicine Rocks, students will study an archaeological site at Medicine Rocks State Park referred to as “Locality E.” Studied by archaeologists in 2010, Locality E consists of hundreds of instances of inscriptions, including historic to modern names, initials, dates and images. It also contained a nearly complete side-notched arrow point dating to the Late Precontact Period (1050 B. P.). 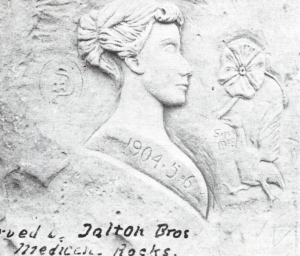 Lady of the Rocks, photo courtesy of Carter County Museum

Nearby to this site is a cave or rockshelter that was completely eroded through the sandstone, which served as a temporary camp site for Herbert Dalton, a sheepherder-sculptor that lived in the area and carved the notable “Lady of the Rocks” inscription. A series of nails were driven into the wall of the cave and used to fasten a cover (likely canvas) to the east entrance, providing added shelter from wind and other weather.