Everyone may hate flossing, but I bet no one knows how long humans have been doing it. Some form of rudimentary dentistry has been around for thousands of years. Though you’ve probably seen those terrifying old-timey exhibits in museums sporting life-like dentist mannequins pulling teeth, dentistry has a tremendous amount of versatility and variability through time and between cultures.

Scourge of the Tweens 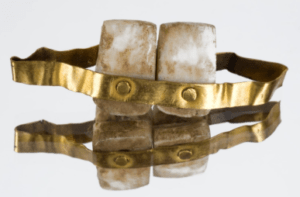 Braces seem like a relatively modern invention for torturing young children in middle school, but they have a much longer history. Braces were not always meant for the living. Archaeologists have discovered ancient Egyptian mummies that have elaborate wire braiding to ensure teeth stay in their proper place. While this practice would have been excruciating for a living individual, on the dead, it served a more long-term issue. Some archaeologists believe that the Egyptians used this kind of braces to ensure a life-like appearance after death to be set for the afterlife. As evidenced by the photo on the left, this system would not work well for consuming food. Though not practical while alive, it would have been valuable in the afterlife.

Egyptians are not the only culture that developed braces; the Etruscans also invented a type of braces, but it was used on living people. These braces were far more functional than the Egyptian wires looped in and around teeth. Etruscan braces were intended to prevent teeth from completely falling out and ensuring that the person could still chew and eat with them. These braces were not the metal brackets we think of today. Instead, the Etruscans would encircle the teeth with a combination of gold and animal sinew to secure their location. This meant that the loose teeth were tied to healthy ones, ensuring they stayed in the correct place and were functional. 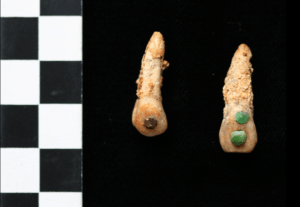 Cavities are a problem that most people have to deal with at least once in their life, but they weren’t nearly as common thousands of years ago. Modern diets contain high amounts of processed sugar, resulting in much higher rates of cavities. Ancient diets, however, were much plainer. The vast majority of people did not have access to fancy and expensive ingredients, like sugar. Cavities in the ancient world were much more commonly a result of wear and tear. The only way to produce flour for bread was to grind it between two stones, resulting in a high concentration of sand and grit that would slowly wear down teeth to nubs over time. This exposed the inner part of the tooth and caused cavities. Due to the lack of effective medicine, these cavities only grew worse with time to the point that they eventually killed some people. Though cavities are present throughout the archaeological record, archaeologists have also discovered several old recipes for toothpaste. It seems that while the idea of cleaning one’s teeth with toothpaste was fairly common, the concept of a toothbrush did not come to be until modern times.

Humans find different qualities attractive based on the society and culture they are in as well as personal preferences. This is what motivates people to change the shape of their skulls with bindings, get plastic surgery, or pierce their ears. Some cultures change, or modify, their teeth to make themselves more attractive. In the Indonesian culture of Mentawai, filing one’s teeth into points is considered beautiful and is celebrated as a coming of age moment for young women.

In addition to filing, drilling was also widespread in ancient times. The ancient Maya believed that placing gems in the visible front teeth was very beautiful. Archaeologists have discovered that this practice was slightly more common for women, but both genders sport this fashion. Common gems used included jade, turquoise, and quartz. The implanted gems were usually circular. Ancient dentists were so skilled at placing these gems that archaeologists have found many Mayan skulls that still sport the look. 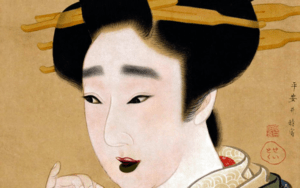 Another, less permanent type of dental modification, is dying one’s teeth black. This practice was done in ancient Japan as well as in parts of Vietnam and other Southeast Asian countries. Though it may not look it, this practice has a medicinal component that coats and protects the tooth, allowing them to last longer. Tooth blackening  similar to filling teeth down into points, was a coming of age ritual. It was something that indicated that woman was ready for marriage. In Japan, the custom was seen as very beautiful and many young women did it to look more attractive. Eventually, this practice fell out of fashion when Japanese Empresses appeared in public with white teeth.

Archaeologists love teeth. They can tell us about diet, where the person grew up and how much they traveled during childhood, as well as the person’s age and general health. Thanks to human fashion, teeth can also show us what is considered to be attractive. Archaeologists can learn about past technology and medicine from teeth. Teeth show us a great deal about our ancestors, and it is fun to imagine what future archaeologists will think about us based on our teeth.