Shelters on the Ground

The concept of shelter is something most people don’t think about because it’s such a strange word. Home is often what comes to mind first because it is far more personal and intimate. A home is where your things are, maybe a favorite book, a special photograph, some plants you’re trying not to kill, fridge magnets in the right order, or a well-worn Monopoly game.

Though the word shelter may sound technical, it is what makes a home possible. Both words and their meanings have undergone change recently due to shelter-in-place orders. Spending so much time in one’s residence starts to change the routine and relationship to what a home is. During this time, Project Archaeology thought it could be fun to encourage readers to look at different types of shelters using archaeological tools. These tools will help you learn more about the people who lived in them and how their lives may have been similar and different from our own. The first group of shelters in the series is shelters above the ground.

The Apartments of Teotihuacan 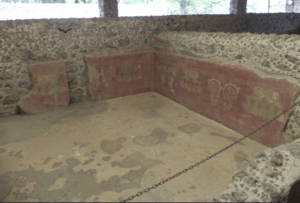 ​Teotihuacan is an ancient city in central Mexico, close to Mexico City, that was built over a thousand years ago. This city, at one point in time, had the largest population in the Americas at over 100,000 people. The city itself is commonly mixed up with Tenochtitlan, the ancient capital city of the Aztec empire, but these people came long before the Aztecs and built a complex and beautiful city. A great deal of the city still survives today and archaeologists are actively researching on the fascinating remains.

In order to house such a massive population, they had to be creative with their use of space, which resulted in an early form of apartment buildings. When taking a virtual tour through the buildings, it is important to remember that the archaeological record reflects things that withstand the test of time. In Teotihuacan, archaeologists do not find furniture, but do find spacious rooms with beautiful murals. Take a look at the rooms and murals as you tour the space—what do you see that looks familiar to a modern-day apartment? What do you see that is different? Imagine what it would be like to live in this building amongst the brightly painted walls and think about what messages they are trying to convey to the occupants, or what it tells you about their daily life. Maybe take the time to look around your own shelter and observe the walls—are they painted? Do you have pictures of family, vacation locations, or pets? 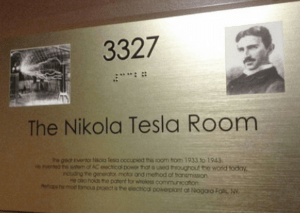 It may be unexpected to think of someone living in a hotel room, but it is not uncommon. Nicola Tesla is one of many individuals who lived in a hotel room for a time. Tesla is a common household name, as he invented the modern electrical system that has alternating currents. Though originally from the Austrian Empire, Tesla immigrated to the United States in the late 1800s and became a citizen. Upon arriving in the United States, Tesla decided to live in New York City and began a close working relationship with Thomas Edison. We think of him now as an incredibly important inventor but by the end of his life he was penniless. The hotel he chose to inhabit was the famous New Yorker Hotel.

You can see his actual hotel room at the link below. Hotels have uniform rooms and decoration, so it is difficult to see different ways to personalize it and make it home. Think about the times you have been in a hotel, even if only for one night. Are there things that you bring with you on trips to make it feel like home? Are there habits you’ve brought to hotel rooms that make it feel like your own? Tesla lived in the room for 10 years. One of the ways he made it secure for himself was to keep his scientific papers locked away in a safe in his room. 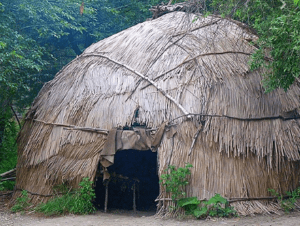 A Wampanoag wetu (photo from: http://www.manyhoops.com/wampanoag-home-a-wetu.html)

The Wampanoag are a Native American group from the Southern Massachusetts and Eastern Rhode Island areas. Today, they are well-known for their tradition of creating Wampum from seashells and being among the first Native American groups to have contact with Europeans. The Wampanoag lived close to the ocean and farmed a combination of beans, corn, and squash as well as hunted in forests and fished in the sea. These people built homes called Nush Wetus that were mainly used for winter living. A Wetu was a home with fire pits on the inside with walls of bark on a cedar frame. These materials make the home warm and comfortable. On the walls, there were bags and baskets used for storage. The home was used as a place for sleeping as well as creating useful items like woven bags or toys for children. This kind of home was developed over thousands of years.

The Wampanoag homesite consisted not just of homes, but also workstations for building boats, gardens for different fruits and vegetables, and areas for eating. Based on what was depicted in the video below, how the homesite different from your house or neighborhood today? How are they similar? Why?

City of Hope (photo from: https://www.nytimes.com/2017/02/18/us/martin-luther-king-resurrection-city.html)

The City of Hope, also known as Resurrection City, was located in Washington DC on the National Mall.  The “city” was erected in the late 1960s by organized protesters who were fighting for economic and financial equality. Resurrection City was truly a city with places to eat, get one’s hair cut, and have children play. The city was built to protest widespread poverty and was led by individuals in the Poor People’s Campaign. Over 3000 people participated. This city and movement for economic equality and justice are frequently referred to as the last dream of Martin Luther King Jr.

The City of Hope was a kind of temporary encampment and shows how people make a place feel like home. This was not a purely utilitarian encampment in any way, in fact quite the opposite. This temporary living space had all the amenities of a neighborhood from a day-care to a community eating space. Though short-lived, the City of Hope shows how humans make a home for themselves wherever they go. Check out more about it here: https://nmaahc.si.edu/blog/series/life-resurrection-city.

Homes look different depending on where, when, and who lives in them. They can be temporary or long-term and utilize space differently depending on the season and necessities. Has your own home, or definition of home, changed at all since shelter-in-place? Maybe one part of your shelter that used to be reserved for one kind of action is more multipurpose. Perhaps another room that used to be exclusively reserved for one thing now has several uses. As we live through this pandemic, we use these above-ground shelters as a unique way to explore how you do things and how other people have throughout history. As the saying goes, by our homes, you will know us—what would an archaeologist think about you based on your home?