Shelters on the Move

Movement is a unifying human characteristic. We migrate, travel, and sail the seas. We run around to chase food, religion, riches, glory, or the one that got away. Before fairly recently, when people moved around, they had to bring their shelters with them too. We will look at some of the shelters humans have developed over time to resourcefully fit with their mobile lifestyle.

Taking an entire shelter on the road is pretty challenging. It has to be a structure that can be deconstructed and packed away quickly or a structure that moves. It has to be made of lightweight materials so humans or beasts of burden can carry them long distances. Those materials cannot be weak or ineffective, as they will not withstand rigorous travel or inclement weather. Finding these materials is not easy, so moving permanent homes isn’t common throughout history. There are many temporary shelters like the covered wagons or backpacking equipment, but for here, we’re going to focus on the more permanent examples.

Home on the Plains 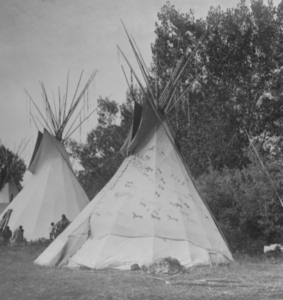 Tipis are perhaps the most recognizable mobile shelter, but they’re far older than you may think. There is evidence, both through oral history and archaeologically, that tipis were created over 2500 years ago. Throughout history, they have mainly been used by North American Plains Tribes. They are no longer common homesteads but were incredibly effective as shelters. Tipis usually (“usually” because there is a lot of variability between different Native American groups) consist of long wooden poles that are angled to make a point at the top. The poles are lashed together and covered with animal hides. These structures commonly had an opening facing to the east. People would also use stones to weigh down the materials to prevent the high winds of the plains from blowing away their shelter. One culture that is commonly cited for their use of tipis are the Apsáalooke or Crow people. According to one scholar, Timothy McCleary, the Crow word for the concept of “prehistory” can be translated as “when we used stones to weight down our lodges.” This translation is also supported by ample evidence of tipi rings dating back thousands of years as well as a wealth of oral history that speaks to the use of tipis. Construction of the tipi varies depending on the culture building it, but the Crow people used a four-pole tipi. The number four was sacred because of its connection to nature through seasons, directions, and other things. The Crow would first stake four poles, then carefully place the others. Once the structure was secure, bison pelts would be draped over the wooden frame. 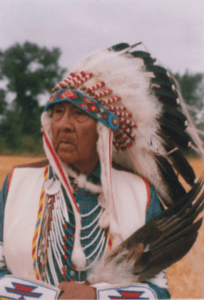 Tipis were developed before horses were brought to North America. People had to move them from one place to another. This travel did not affect the size, as tipi diameter ranged between 15 and 21 feet. No matter the size, life inside the tipi was very organized. Individuals would sleep on the floor with bedding to make it more comfortable, and personal items were hung on the walls or placed between sleeping areas. Those living inside were also organized, usually by dividing the sides between genders and sometimes age so certain people would sit or sleep in places of honor within the tipi. Is there a place in your home for people of a particular status, age, or gender? Do you have doors or windows that bring in sunshine or help keep out the wind? Does your home use local or natural resources to help support its foundation?

If you are interested in reading more on tipis and about Dr. Joe Medicine Crow, click here: https://projectarchaeology.org/product/investigating-a-crow-plains-tipi/

Homes of the Horde 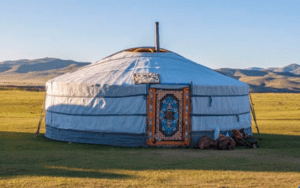 Traditional yurt on the Mongolia steppes (photo from: http://www.mongolia-travel-and-tours.com/yurt-mongolia.html)

Though now more commonly associated with hipster colonies and green/eco-living, yurts have a long and ancient history. There is archaeological evidence to suggest that yurts have been around for as long as 3000 years. One of the first people to write about yurts was the Greek historian, Herodotus. Yurts, like tipis, are also common to Plains-dwelling peoples, though on the Asian steppes. The best historical account of yurts comes from The Secret History of the Mongols, a tome that describes the Mongol Empire that Genghis Khan built from scratch, though they are referred to as “ger” and not “yurt.” The Mongol people were largely nomadic, and yurts could be taken down quickly and easily carried by Mongol ponies and horses. This horse breed is still famed in modern times as beautiful and strong with a great deal of endurance. These structures are also not a thing of the past but are still commonly used by the Mongolian people as permanent shelters and nomadic ones. 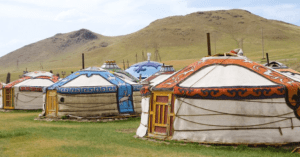 Encampment of yurts in Mongolia (photo from: https://tinyhouseblog.com/yurts/traditional-yurt-influences-tiny-housers/)

Yurts have flexible wooden poles that support a cloth frame, usually made of felt. This fabric is very important and is a family heirloom that is passed down from generation to generation. They can comfortably house between a small family or up to 15 people. Like the tipi, they have an opening in the center of the ceiling to let in light and let out smoke. The yurt is commonly oriented with the door facing south. Around 90% of Mongolia’s rural population lives in yurts and around 60% of those in the capital city live in yurts. Though there are similarities to tipis, yurts are very different structures—a product both of the culture and climate of the Asian steppes. Is there anything similar between a yurt and your own home? Is there cloth on the walls—like a beautiful scarf you hung up, a patterned quilt, or even a tapestry? Do you also share your home with your family and others? How quickly do you think you could pack up your essentials for a trip? 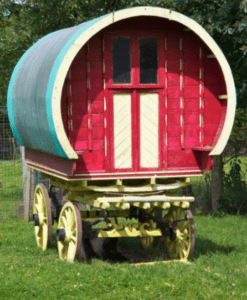 Romani wagons are the original covered wagons and have been around for around 170 years and are still in use today. Though the word “wagon” usually connotes a vehicle that is exclusively reserved for transporting goods, Romani wagons act as a shelter in and of itself. These wagons are called vardos. There are six different types of vardos that people can choose from, and each has different characteristics that fit a variety of families and their lifestyles. The Romani and their vardos are one of the few cultures that lived in movable homes who are not from a plains area, like the Mongols or Crow. 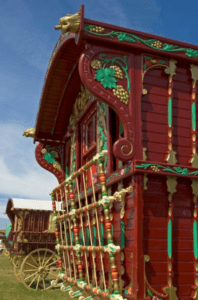 The Romani people were once more commonly known as gypsies, a group of people that traveled around Europe. Today, the word “gypsy” is considered insulting and Roma or Romani are the correct names. These people were often harshly judged and persecuted for various reasons, the most common being racism. This attitude forced the Romani to be constantly on the move. Vardos are easily recognizable from other covered wagons due to their distinctive, beautifully intricate carvings and decoration on the in and outside of the wagon. These designs varied a great deal, but are known for being incredibly intricate and skilled. In addition to this practice that celebrates the culture, it could also act as a testament to skill. Are there parts of your house where you showcase you or your family’s artistic skills? Have you ever moved or had the desire to move because of persecution?

Check out this link to hear some oral history on vardos: https://www.gypsy-traveller.org/heritage/accommodation/

Moving shelters may not be as common today, but they played an important role in many cultures throughout history and are still common in some areas. While other types of shelter do show off human brilliance through longevity, these moving shelters show an impressive kind of ingenuity to solve a problem: how to create a comfortable home that can match the pace and lifestyle of those who want to live in it.