The Firelighters Are Back

Wildfires have been around far longer than people and are a natural process that cleans out forest debris. Though wildfires can happen anywhere, they are most common in drier areas such as the western US. The people who have lived in these areas for thousands of years could not run away every time a wildfire threatened their homes, so they learned to manage them. Today, our second blog in the three-part series will focus on Native American history and management surrounding wildfire. 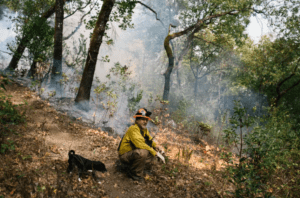 Wildfires are something that professionals today do everything in their power to avoid and prevent. These people have intense training and are skilled professionals in keeping people and the environment safe. People cause most wildfires and others are started from natural events, like a lightning strike. Either way, the reaction is often: slow the spread and prevent wildfires in general at all costs. This strategy makes all the sense in the world. Wildfires are dangerous for people, they cost a great deal of money through the damage they inflict, their smoke can cause respiratory problems, and they can grow to massive proportions that threaten ecosystems, animals, plants, and thousands of people.

To a certain extent, wildfires will happen whether we like it or not. The difference is how bad it will be when it does happen. There are natural processes in a forest environment where leaves, branches, and trees fall to the forest floor. There are wildfires in prairies as well, which accumulate their own types of plant matter. This decaying plant matter provides food that accumulates over time. If nature had its way, wildfires that burn for a bit and then go out would happen frequently. Fire clears out the forest floor decaying plant matter quickly, and because there is not much build-up due to regular fires, the wildfire is less likely to be a blazing inferno. If wildfires are not allowed to do their thing, then the forest starts to accumulate a massive amount of plant build-up. This serves as kindling for a wildfire that now has a huge amount of fuel, allowing it to burn hotter, longer, and farther.

Forest and fire management is what Native American populations have been doing in North America for thousands of years, and this older strategy may be the key to decreasing the number of large and dangerous wildfires that threaten people in the area.

It seems crazy in this very modern age that humans could be capable of controlling something like fire. To those of us who only see fire in a fireplace or contained within a stone ring at a campsite, fire behavior is not something that 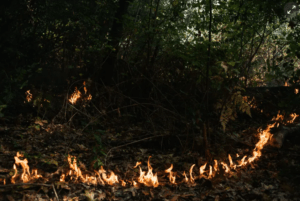 many understand—it is just something we use. People have been living in North America for tens of thousands of years, and developing an understanding of the environment was something crucial to survival. Slowly, over a great deal of time, forest ecosystems adapted to consistent burning practices.

Today, certain descendants of these people from thousands of years ago prefer to call themselves “firelighters” over “firefighters” since they work with fire rather than fight to suppress it. There is a plethora of evidence of this practice from oral histories of Native groups all over America. Scientists can also find evidence of these controlled burns in tree rings as well as in charcoal layers within the soil stratigraphy. Perhaps one of the most interesting things about this entire collaborative effort is the common thread of archaeology throughout. Studying oral histories, gathering data, and speaking to descendent community members who remember learning the practice of light or control burns from parents, grandparents, and great-grandparents is incredibly powerful.

This practice was forcibly ended when Euro-Americans began to migrate and settle in the West. This movement to the West brought new cultures and beliefs, and as Native American populations were forced into reservation systems and off their historically-held lands, the practice of cultural—or light—burning slowly faded away. At the same time, according to National Parks Service archaeologist and wildfire management expert, Lisa Hanson, the number of massive wildfires with enormous destructive effects began to increase, espeically in the past several decades. These events only helped spread fear of fire. In recent years, however, there has been a slow reversal back to the old ways of doing things. State governments and agencies have started to reach out to native peoples to collaborate moving forward using modern technologies combined with firelighter methods and traditions. This teamwork will change the way forests look out West, but this change could be for the better. To imagine these practices with absolutely ancient origins is a fascinating privilege, as is the opportunity to bring it back into daily life and conversation. It also comes with good news too. Smaller, light burns are easier to control, and could go around significant sites. These control burns are also far less intense and hot, meaning that if they do go through an archaeological site or area, it will not mow down history but avoid devastating damage. 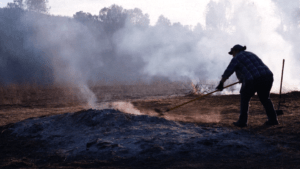 These kinds of light burns cannot just happen at any time. They require lots of government planning to provide just-in-case resources, like water to put out any rogue flames. They need the wind to be slight or nonexistent, with humidity in the air. There also needs to be fuel for the fire underfoot. With all these conditions in order, a light burn can begin. Workers have a variety of tools to start fires as well as detailed maps that outline exactly where they want to burn. As the fire starts, people move along with it, staying in constant communication. It isn’t exactly like the practice started thousands of years ago.

As with most things, there is never going to be just one solution that miraculously fixes all problems. Even with these new and collaborative plans, there will still be large fires in the future that are dangerous, scary, and damaging. That being said, the goal now is to prevent those kinds of fires from happening every single year, or even multiple times in one year. These new plans and efforts aim to prevent exactly that by managing and minimizing what is there to catch fire, the same way people have been doing for thousands of years.

To imagine these practices with absolutely ancient origins is a fascinating privilege, as is the opportunity to bring it back into daily life and conversation. It also comes with good news too. Smaller, light burns are easier to control, and could go around significant sites. These control burns are also far less intense and hot, meaning that if they do go through an archaeological site or area, it will not mow down history but avoid devastating damage.

Next week, look forward to hearing from actual experts! We will be talking to Dan Broockman, a Bureau of Land Management archaeologist and firefighter. The other will be Jen Ryan, a technical specialist in fire who works for the U.S. Forest Service. Below, you will also find additional resources provided by Neil Weintraub, a U.S. Forest Service archaeologist, who was kind enough to provide extra resources about the training of fire archaeologists.