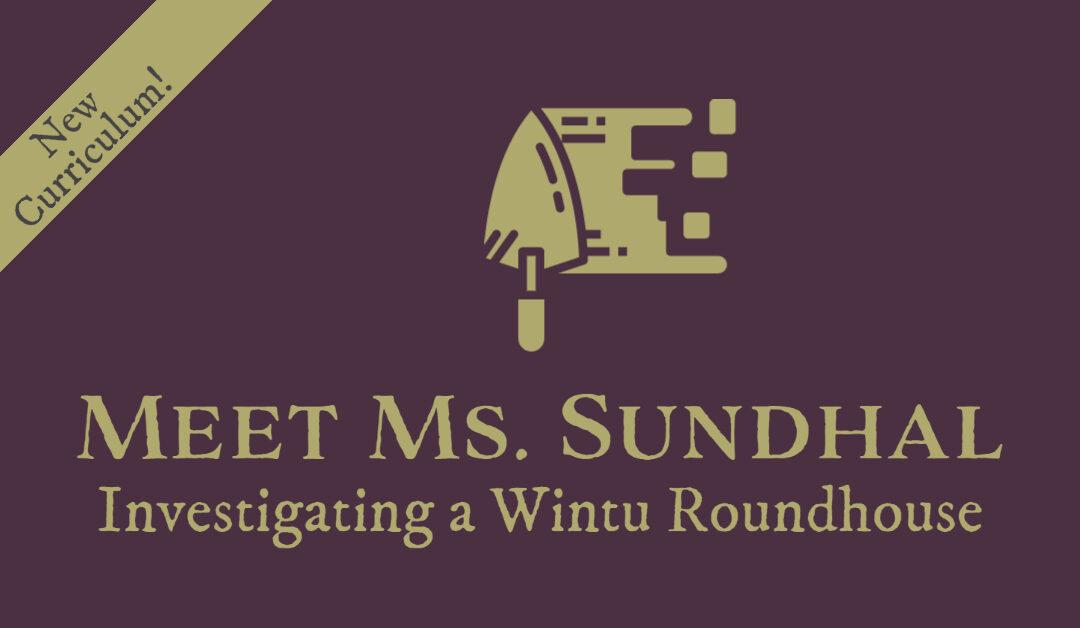 Adapted from Ms. Sundahl’s text in Investigating a Wintu Roundhouse

Today we’d like to introduce you to Ms. Sundahl, the archaeologist featured in Investigating a Wintu Roundhouse. She is an archaeologist who focuses on the archaeology of California. She excavated the Tanya archaeological site; the site that students analyze in this new curriculum! 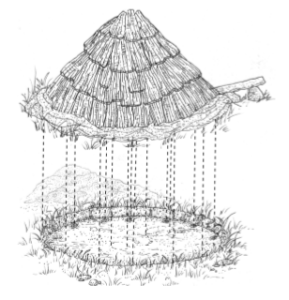 The Wintu Indians have lived in the northern Sacramento Valley, and the mountains around the Valley, for at least 1,000 years. They needed to use many plants and animals for food and to make clothes, baskets, and tools. Salmon and acorns were the most important, because they could be stored and used for food year-round. The Wintu people would build permanent houses in villages near rivers and streams. In the spring and summer, they sometimes moved up into the mountains. It was cooler up there and good for hunting, fishing, and plant gathering. In the late summer and fall, they would return to their villages to hunt salmon and gather acorns. The Wintu village that archaeologists now call the Tanya Site is beside a small creek west of the Sacramento River. It would have been lived in mostly in the late summer, fall, and winter.

To build the large roundhouse, the Wintu people built a round hole about 2 feet deep and 20 feet across. They would pile up the dirt from the hole around the outside of the shelter to add extra support. They put poles around the edge and leaned them inward to meet at the top, kind of like a tipi. Then the tops were fastened together and the whole thing was covered by branches, bark, and dirt.

On the eastern part of the roundhouse, archaeologists found a lot of ash with large rocks around it. It was about two feet across and was probably a fire place. On the eastern edge was a very large rock that was supported by other large rocks. It was tilted toward the outside. We think that this provided a little opening to the outside so that fresh air could flow into the shelter and smoke could flow out of it.

Archaeologists can tell this was a Wintu shelter because the Wintu people often built shelters the same way at different sites. Wintu 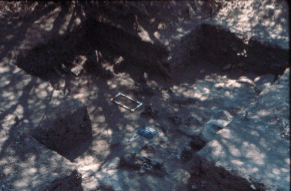 This photo was taken in the early 1990’s when the roundhouse at what archaeologists call the Tanya Site was excavated. This site used to be a Wintu village.

shelters were round and sunken into the ground. Their floors would be one to two feet below ground. The fire-place was at the edge of the floor. The angled poles would make the edges of the shelter very low. People could not stand up along the edges, but it was great for storing things. Five hopper mortars were found in the large roundhouse in the storage areas around the inside edges. Hopper mortars are large stones with baskets on the center. They were used for grinding acorns and other foods. They were often found in Wintu houses. The big difference between the roundhouse and most Wintu houses of the time is that the roundhouse is much larger. Most Wintu houses were ten to twelve feet across.

The description Ms. Sundahl gives is helpful for students to read because it is based on her research of the site. Combing Ms. Sundahl’s research with the information from descendent community members creates a well-rounded interpretation of the Tanya Site. Students get to experience using multiple lines of evidence to understand and interpret the Tanya site just like an archaeologist!