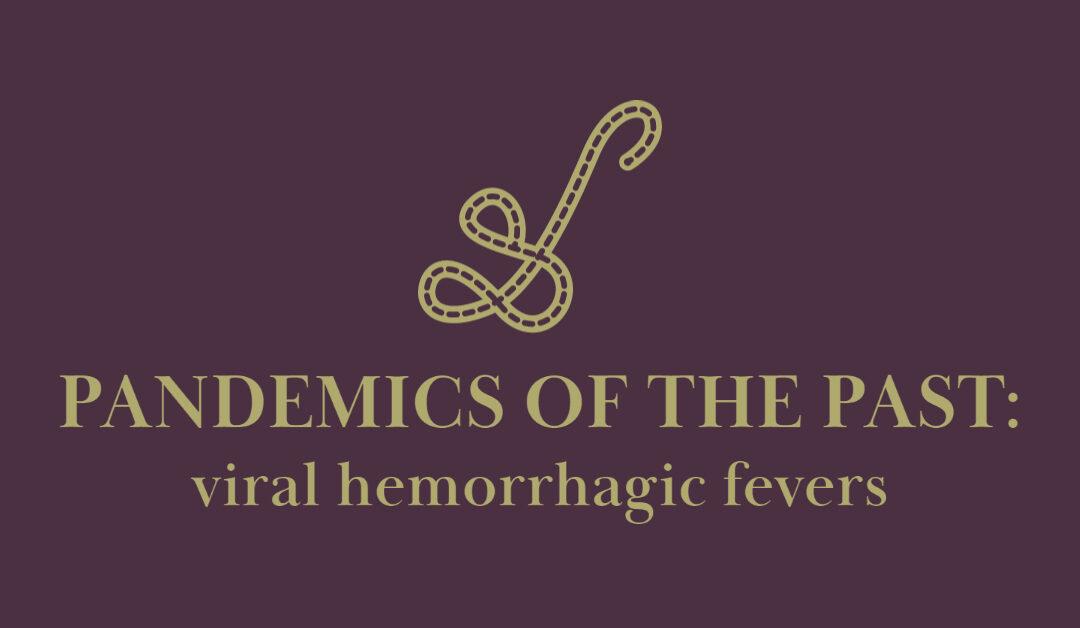 Viral Hemorrhagic Fever (VHF) sounds like one of those things you just never want to get. Unlike the other pandemics and sicknesses that we have covered and plan on covering in this series, VHF is not one single sickness but a collection of different diseases that are all classified as viral hemorrhagic fevers.

For an illness to be classified as a VHF, it must be a virus that belongs to a specific family. These viruses usually affect multiple organ systems within the body, as well as the vascular system. The effect on the vascular system, which is the one that circulates blood, is excessive bleeding; this is where the “hemorrhagic” comes in. Some VHFs are less common, like Marburg Virus, while others may sound 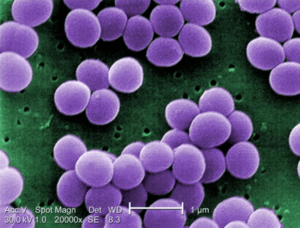 much more familiar, like Yellow Fever or Dengue. Others may remind you of pandemics that did not happen so very long ago, like Ebola.

All of these are viruses, not bacterium. There is a big difference between the two that is crucial to understanding treatment and how humans of the past understood them. The two impact the body in different ways, affecting how archaeologists study them. Bacteria are living things, albeit very small ones. They have been around for billions of years, a fun fact scientists know because they are present in the fossil record. Bacteria, since they are living organisms, can survive on their own and do not need a host. They can replicate by themselves, also known as asexual reproduction. Bacterial illnesses can be cured or helped through antibiotics, though they can evolve and mutate to render certain antibiotics useless.

A virus is very different from bacteria. A virus is not really a living thing, but rather a tiny shell that holds genetic information. Viruses require a host. They attack specific types of cells, inject their DNA, and use the cell’s contents to replicate their genetic information. It is precisely this ability that makes them so difficult to get rid of, but thanks to vaccinations, humans have nearly eradicated certain viruses 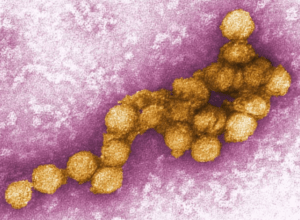 Archaeologists study things from the past that are preserved until modern times. One of the only physical things that we have to study diseases from the past are skeletons. For human remains, usually the only thing that is preserved is the skeleton. There are very few diseases that leave physical marks on a skeleton. In the absence of obvious physical indication, archaeologists must rely on more in-depth genetic analysis and artifacts. Genetic analysis can yield important data revealing the type of virus from which the individual died. It can also tell us the specific mutation of the virus, helping scientists understand how the disease changed through time so we can predict changes that will happen in the future.

Yellow Fever, like many other VHFs, is transmitted from mosquitos to humans. Because of this, it starts in tropical areas and spreads from there. Yellow Fever is originally from African jungles, where mosquitos and humans have high populations and live close to each other. Though this VHF started in Africa, once globalization began, it quickly spread. This spread was most prominent from Africa to North and South America because of the Trans-Atlantic Slave Trade. Archaeologists can document the transfer of disease from one continent to

Diagram of a slave ship (Photo from British Library Board)

another in several ways. Archaeologists figured out that the water containers aboard the ships emphasized the spread through studying oral histories, an understanding of transmission, artifacts from the ships themselves, and historical documents about this time period. Mosquitos would populate the ships when they were docked in Africa and lay eggs in the water barrels that were on the decks. The eggs would then hatch infected mosquitos mid-way through the voyage that would bite those aboard, giving them Yellow Fever. More mosquitos would hatch until the ship docked in the Americas. The insects would find new homes in the rainforests of South America or the wetlands in North America. Even today, there are pockets of South America that still have active Yellow Fever cases.

Though the first spread of Yellow Fever was not documented until the 1600s with the Trans-Atlantic Slave Trade, scientists believe the virus has been around for 3000 years. It is thought, based on the virus’s DNA profile, that mosquitos would bite and infect monkeys in African jungles. Over time, humans began moving into and living in the area. As a result, mosquitos would bite them and infect people with Yellow Fever. Yellow Fever reached larger cities as it started to spread more globally. For example, once it was located in the Caribbean, Boston went on a city-wide quarantine in 1648 to avoid a pandemic in the United States. Archaeologists have also begun to attribute the decline of the Mayan empire to Yellow Fever, though this idea is highly contested and controversial since it would mean Yellow Fever was in the Americas before the Trans-Atlantic Slave Trade. The Mayan Empire began declining between 800 and 1000 CE, a waning archaeologists have observed through data collection. Excavations have shown a decrease in population and changes to urban centers that hint at the empire collapsing. Archaeologists can also create models to show what a civilization in decline looks like from a disease or some other crisis. Archaeologists can then compare those models to archaeological evidence to observe how pandemics like VHF physically affect cultures.

Yellow Fever is not the only VHF with a long history. Dengue Fever is another VHF that is caused by a mosquito bite. An infected person experiences a range of symptoms such as vomiting, rash, aches and pains, and even internal bleeding if the case is severe enough. Unlike 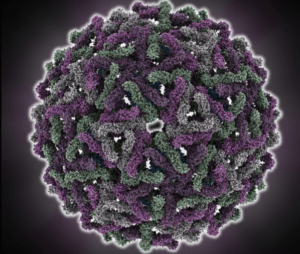 Yellow Fever, however, archaeologists do not think the virus originated in Africa. The first recorded mention of dengue fever was found in an ancient Chinese medical encyclopedia that dates back to 992 BCE. This means that dengue may have originated in the tropical forests of China. Though it may have originated in China, empire expansion brought it to other areas of the world. There were many recorded outbreaks of Dengue Fever outbreaks in the New World. Archaeologists have found evidence that these are a direct result of the conquest of the Americas.

Archaeologists are professionals in understanding patterns. We dig, read, collect, and identify, but none of the information and data means anything if we cannot understand the patterns and link them together. Studying pandemics of the past is all about understanding patterns and making sense of them. Understanding how one type of virus contributed to the decline of a culture is a useful model to compare to other events, like other past pandemics. It can even help us understand how current pandemics compare to past ones. Historical context is important to understanding present issues and future concerns, all of which archaeologists can contribute to in a positive way.

Next week be prepared to learn about leprosy.