Witch is it: Trick or Trowel

Halloween may seem like a silly American holiday, but it has ancient origins. Halloween is not American; it originated in Europe. Celtic people created this holiday around 2000 years ago and celebrated by wearing costumes and lighting bonfires. It was called Samhain and served as a marker to delineate between sunny summers and the dark, cold winters ahead. The duality of the two seasons represented the boundary between life and death. It was believed that Samhain was when this boundary became weak, allowing the dead to travel. Lighting bonfires and wearing costumes was a way to honor the dead and prepare themselves for the winter ahead.

Romans conquered the Celtic people and their territory by 43 CE, and certain customs were absorbed by the Romans and later the Christians. Archaeologists can trace the evolution of Samhain to All Saint’s Day, a Christian holiday on the first days of November.  All Saint’s Day eventually became All Souls Day, also known as Alholowmesse in Middle English, which turned into the word Halloween.

Fire-breathing, scaled, and ferocious dragons are important parts of many cultures around the world. There are a variety of sizes, shapes, and forms, but the most common appearance includes lots of teeth, horns, scales, and wings. In archaeology, dragons have been known to symbolize good fortune, power, wealth, and danger. Archaeologists see depictions of dragons everywhere, especially in eastern Asia, where they were symbols of royalty. They are also present in many famous medieval European stories, like Beowulf. More recently, dragons have had a massive surge in popularity thanks to fantasy authors who use dragons as main characters, from Smaug to Drogon.

Can anyone think of massive bones that can be found emerging from the ground ancient cultures would have found interesting? Archaeologists hypothesize that dinosaur bones were the original inspiration behind dragons. Early cultures saw massive bones and toothed-skulls and created imaginative creatures to fit what they saw. At that time, the idea of a dragon was the best explanation to be had. 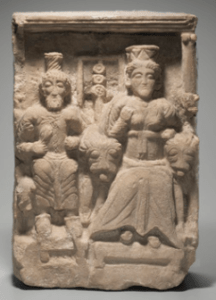 Carving of Atargatis from the Yale University Art Gallery

Imagine this: shell-clad, flowing hair, incomparable beauty, and sharp teeth. The myth of mermaids has been around for thousands of years, but their characteristics depend on who is telling the story. The oldest reference to a mermaid—defined here as a woman with a fish bottom and a human top—is around four thousand years old. She is Atargatis, a Syrian goddess who was in charge of fertility and general health. There have been many other deities in the archaeological record that exhibit a range of parts and powers, but Atargatis is the oldest mermaid-like image found. After carved goddesses, the next mention of a mermaid is in literature: The Odyssey. In this epic poem by Homer, mermaids are called sirens, or beautiful sea-women who would perch on rocks and sing so irresistibly that ships would run aground and sink just to be near them.

Documented history was, far more often than not, a man’s world. Mermaids had the ability to represent an ideal woman as beautiful, chaste maidens waiting for sailors. However, they could also be blamed for unfairly bewitching men, so they also have teeth, claws, and a penchant for drowning sailors. The sea is a mysterious place, and for ancient sailors who spent great deals of time away from home on the ocean, it makes sense that fantastical creatures and tales were created. There is a reason things that are too good to be true are called “fish stories.” Mermaids could either be innocent, inaccessible women of your dreams or bloodthirsty monsters who eat you. Either way, Ariel was quite the underwater archaeologist, we just wish she had documented from where she took her doohickey.

Witches are another Halloween “creature.” Perhaps the original point for these stories were mages, or people in ancient cultures who would 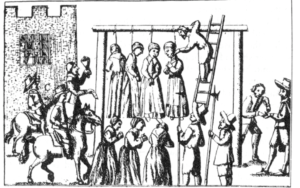 act as the wise voice for their group. Depending on the culture and time period, a mage could be a male or female. These individuals were typically in charge of medicine, midwife duties, soothsaying, protection, and leadership or future-seeing activities. There is a great deal of archaeology associated with these individuals, who were usually placed in the upper echelons of society and buried with grave goods. However, the idea of a witch is usually negative. The concept of a witch, especially in the middle ages in Europe, was an evil and vindictive woman who poisoned and tricked people. In real life, those accused of witchcraft were often free-thinking, independent, intelligent, and capable of healing or helping others. At this time, women were to be complacent and dutiful. This agency displayed by so-called witches was considered inappropriate for women to have, especially once Christianity became dominant.

Being accused of witchcraft was a crime, and if convicted, gave the law the ability to burn women at the stake, drown them, torture them, and behead them by the thousands. Think about how some famous past women were described. Anne Boleyn, a Queen of England, was accused of bewitching Henry the 8th and ultimately beheaded for additional false crimes.  Several innocent girls were hanged in Salem, MA. The idea of a witch hunt isn’t even an old one; there are stories of women being accused and killed as witches in modern-day India less than ten years ago.

This Will Raise Your Spirits

Many people believe in the idea that after a loved one passes on, some part of them stays behind. There are many cultures and religions, both ancient and modern, that believe that the dead are always amongst us, or there are special days each year where the dead can visit us. For example, ancient Egyptians carved or painted life-like portraits of the dead on their sarcophagus because the persons soul left the remains at night and needed to recognize themselves in the morning when they returned. Día de los Muertos, or the Day of the Dead, is a holiday that millions celebrate around the world that originated in Mexico and is now a blend of Christian and pre-Columbian beliefs. This day is a celebration when the dead are allowed to return and visit their families.

Interview with an Impaler 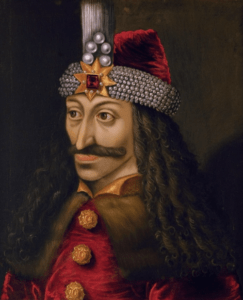 Portrait of Vlad the Impaler

Dracula may make you think of Brad Pitt with way too much makeup on, but the name Drakula is actually a royal one for the family that ruled what is now Romania. Count Dracula, the vampire character from Bram Stoker’s novel, was based on Vlad Dracula—who is more commonly known as Vlad the Impaler. Horrifying nickname aside, Vlad Dracula is seen as a hero in modern Romania because he saved the country from Turkish rule during his time as king. Many unpleasant stories about him helped inspire the myth of vampires, like that he dipped his bread in the blood from his impaled victims that helped inspire the myth of vampires.  Vlad may have inspired the 18th century author, but the idea of a blood-sucking monster had been around long before the most famous member of the Dracula family.

Vampires hit their most popular levels thanks to the books of Bram Stoker and Stephanie Meyer rather than in the Middle Ages during the Plague. People who had passed away from the Plague would sometimes bleed from their mouths and other areas, leading those still alive to believe a monster had come along and killed them, not bacteria. Vampires became scapegoats for many problems, from a bad farm season to widespread sickness. A person, usually dead, would be blamed and accused of being a vampire. In the archaeological record, there have been many burials found with wooden stakes through the heart—just in case the person got thirsty again. Archaeologists have found many other signs of presumed vampires in graves, ranging from decapitations to bricks and rocks forced in the mouth. Though archaeologists have found many burials of people treated like vampires, no real ones have shown up…yet.

Mummies are perhaps the most famous archaeological connection to Halloween, but not all mummies come in linen wraps and none of them come to life to attack archaeologists (otherwise I would’ve been dead a long time ago). The idea that mummies rise and move around is actually not far from the truth. Ancient Egyptian religion is complex and has a vivid afterlife. One part of this belief system is that after a person is mummified and buried, part of them stays behind. This part is the Ka, or a piece of the soul, that stays behind and leaves the sarcophagus. So, the idea that mummies can get up and move around is kind of accurate, but that’s the only accuracy in this tale.

Mummies are also not a practice restricted to Ancient Egypt. For example, several cultures lived in what is now Peru that practiced mummification. Among these cultures were the Nazca and Inca, who took their dead and mummified them by creating mummy bundles. Mummy bundles had the deceased person in a crouching position, and layers and layers of cloth were wrapped around them until a bundle had formed. Mummies, though dead, still played crucial roles in the lives of the living. Mummies would be the heads of households, were consulted for advice, and given food and drink. Mummification is also not an ancient practice. There are several cultures in Papua New Guinea that practice their own form of mummification.

Unlike dragons, krakens cannot be attributed to dinosaur bones. The oldest archaeological evidence for a belief in krakens is almost 1000 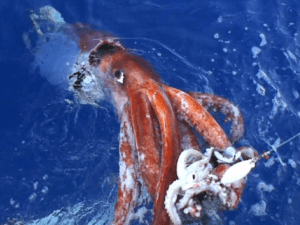 years old and from Norway. King Svere of Norway wrote down an account of what he saw. Archaeologists today believe what he saw was a giant squid, which people in the past called a kraken.

Krakens were described as massive sea monsters, essentially a huge squid, with thick and powerful arms that crushed ships and a toothed mouth that could devour entire crews. “Here be dragons” was a common phrase amongst sailors to mark places on the map that were either unknown or thought to be dangerous. Today, sightings of giant squid are so rare that marine biologists believed they were a myth until photographs were taken of the quid in its natural habitat in 2005. Though there were many credible sightings in the late 1800s and beyond, scientists needed hard proof to better understand these massive predators. While ancient sailors dramatized their experiences, it would be hard not to if you saw a thirty-foot long squid appear near your ship!

Humans are creative, and we crave to understand the things that we cannot explain. This is why tales of fantastical creatures exist. These ideas fit the pieces available to us at the time. Dragons seemed real because there were dinosaur bones people could see and touch but not explain. Mermaids were invented to comfort lonely men sailing the high seas. Witches provided an excuse to get rid of free-thinking independent women. Vampires helped explain away the post-death exhale bodies sometimes make. The creatures that kids dress up as during Halloween? These are not monsters! They are evidence of complex brains, ingenious creative minds, and solutions to unsolvable problems. They are what archaeologists love to understand better. Think of that when Ariel, a kid wings and scales, or a plastic-fanged Count ring your door this Saturday.

We would also like to take this time to remind our readers that culture is not a costume. Please be mindful when picking your Halloween attire.