Pandemics of the Past: Tuberculosis 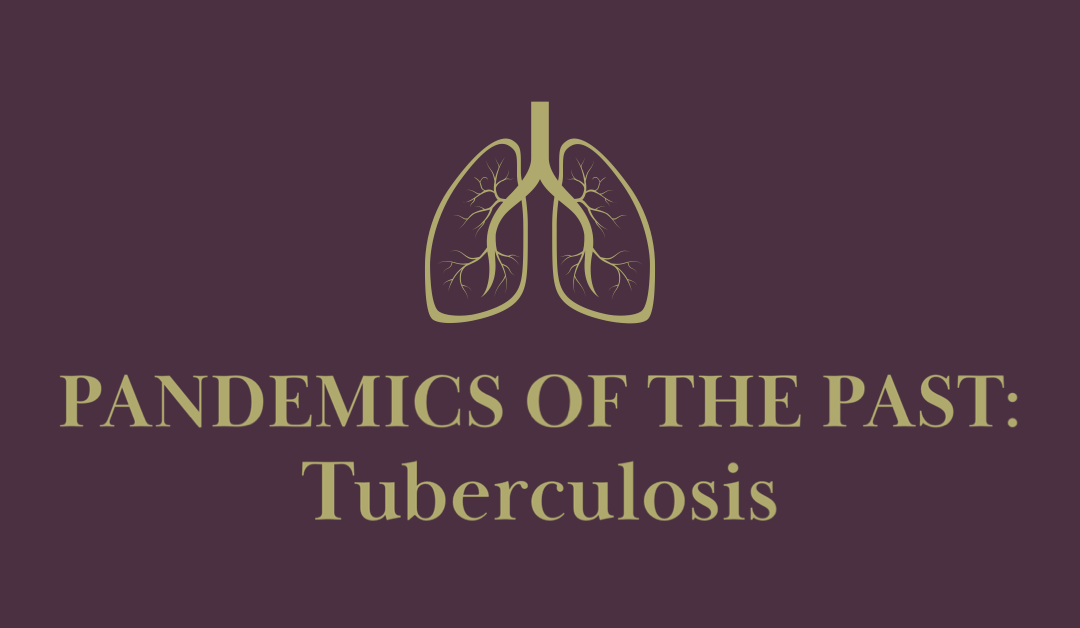 Tuberculosis, also known as TB, is an infectious bacterium that has been around for millions of years. Though scientists and archaeologists speculate that it has been capable of infecting humans since approximately 20,000 years ago, the first evidence of human infection is around 9,000 years ago. In antiquity, tuberculosis was not as widespread or common as it is now, but it was rather rare to contract. The first evidence of an infected human is from an ancient Israeli individual who lived in the city of Atlit Yam, which is located on the Mediterranean coast. Archaeologists have also found written evidence of tuberculosis from several ancient cultures. Written records describing the disease have been dated to 3300 years ago in India and 2300 years ago in China. These documents describe the appropriate symptoms, making archaeologists confident that tuberculosis was present on occupied continents fairly early on in human history.

Tuberculosis was widespread in the ancient world, infecting people all over the globe. There is even evidence of TB in Peruvian mummies 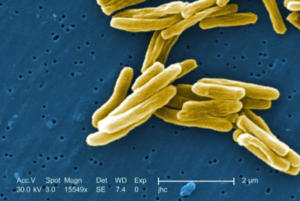 from pre-contact times. This means that the bacterium was one of the few diseases present in the New World before Europeans arrived. It was previously thought that almost all diseases common in Europe were completely new to the North and South American continent. Thanks to this archaeological discovery, scientists hypothesize that tuberculosis was one European disease already present, though they may have carried different strains or mutations of TB.

How You Get It

Tuberculosis is a little unusual in comparison to other diseases we have covered in this series with regard to how it is contracted. Tuberculosis bacterium lives in the lungs, where the majority of symptoms are. To spread from person to person, the bacterium must leave the infected individual’s lungs and root themselves in the lungs of a healthy, uninfected person. This means that the bacterium spread through the air. You cannot get tuberculosis from sharing food or drink with an infected person, touching them, or touching their belongings. The bacterium is passed by an infected person coughing, speaking, or singing since these actions expel bacterium from their lungs into the air where a healthy person would breathe them in.

This bacterium has had many names through time, from “phthisis” in ancient Greece to “tabes” in ancient Rome to “schachepheth” in Hebrew—a reference found in the bible. Archaeologists know that these words all mean tuberculosis because they all describe the same symptoms. These written texts and descriptions are great at providing evidence of the disease, and so does the data from excavations.

When archaeologists excavate, whether it is artifacts, features, or human remains, it is done with the greatest care and respect. Everything is meticulously documented, photographed, mapped, and recorded by multiple professionals. There is a discipline of archaeology, called bioarchaeology, that is dedicated to the study of human bones. These specialists can detect pathologies, like diseases, if there are visible marks on the bones. Not many diseases leave these kinds of visible marks, but tuberculosis does. In advanced cases of tuberculosis, the bacterium spreads from the lungs to other organs in the body, infecting and damaging them. The damage can even extend to bone. Side effects of the disease will cause osteonecrosis, or areas of dead bone that leave visible pockmarks. There are other osteological signs, such as fusion in the vertebrae (or spine), degradation of the hip joint area, and other areas of bone fusion and ruin. In addition to visible signs of infection, archaeologists can also submit samples for testing to confirm the individual did have tuberculosis.

These ancient bones, in addition to providing valuable information about the historical record, are also helping modern medical efforts to combat tuberculosis. This is not the first time archaeologists and modern doctors have pooled resources and knowledge to combat ancient diseases, like syphilis and influenza. It is important to remember that for humankind, many of these diseases are not new, only variations on a theme. Studying older strains can help scientists understand how the bacterium changes through time and how people have adapted to survive. Tuberculosis started as a relatively rare disease because highly crowded urban centers were not as common. With more space and lesson crowding, it was far more difficult for the bacterium to spread from one person’s lungs to another. As human population centers grew larger and more crowded, tuberculosis became more common and deadly than it was previously. 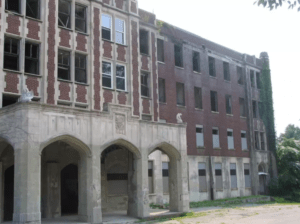 In past posts for this series, we’ve covered the idea of strategic quarantines, where infected or sick people were forced into sequestered areas to prevent the spread of disease. These types of quarantine were for the good of many instead of the needs of a few, but there are other types. Tuberculosis sanatoriums were used in medieval times as well as in the 1800s. These areas were created with the intention of being calm, healing places where those with tuberculosis could come to recover and regain their health.

These institutions were used before the advent of drug regimens and vaccinations that combatted the disease. Sanatoriums may sound like scary facilities but were funded retreats for those with TB. Because there was no medicine to help alleviate or cure symptoms, the only thing doctors could prescribe that seemed to help was fresh air and rest away from those they could infect. Ancient cultures knew quarantines were effective ways to prevent wide-scale infection and promoted the population’s safety. Though people did implement quarantines during ancient pandemics, such as during times of plague, there is no archaeological evidence of ancient quarantines associated with tuberculosis. There could be several reasons for this, but most likely is that tuberculosis was not a pandemic in the past—at least not to the recognizable extent the Plague was. It is only in relatively modern times that quarantines in the form of sanatoriums were promoted for tuberculosis.

TB in The Modern World 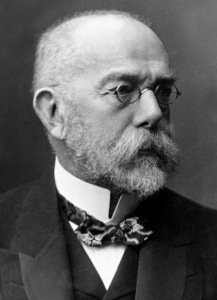 Robert Koch, the doctor who identified TB (Photo from National Institutes of Health)

Though tuberculosis has ancient origins, it is still a huge problem for many people and countries today. 1.4 million people died from tuberculosis in 2019. Tuberculosis is still one of the top ten causes of human death on the planet. In the late 1800s, tuberculosis was responsible for the deaths of one out of every seven people in the U.S. and Europe.

The bacterium was studied and identified by German doctor, Robert Koch, in 1882. Even though we have known about it for a while, and had a vaccine for almost a century, it continues to be a worldwide health issue. Because tuberculosis travels in the air from the speaking, singing, or coughing infected individual to a healthy one, it is especially dangerous in crowded situations. In the modern world, cities have become increasingly crowded with inaccessible medical care. Tuberculosis is entirely preventable thanks to modern medicine. There is a vaccine that can be given to young children to help prevent them from contracting it. There are also a set of prescribed drugs that, when taken correctly, can completely cure infected individuals.

Next week, we start a new series on how climate change affects archaeology!