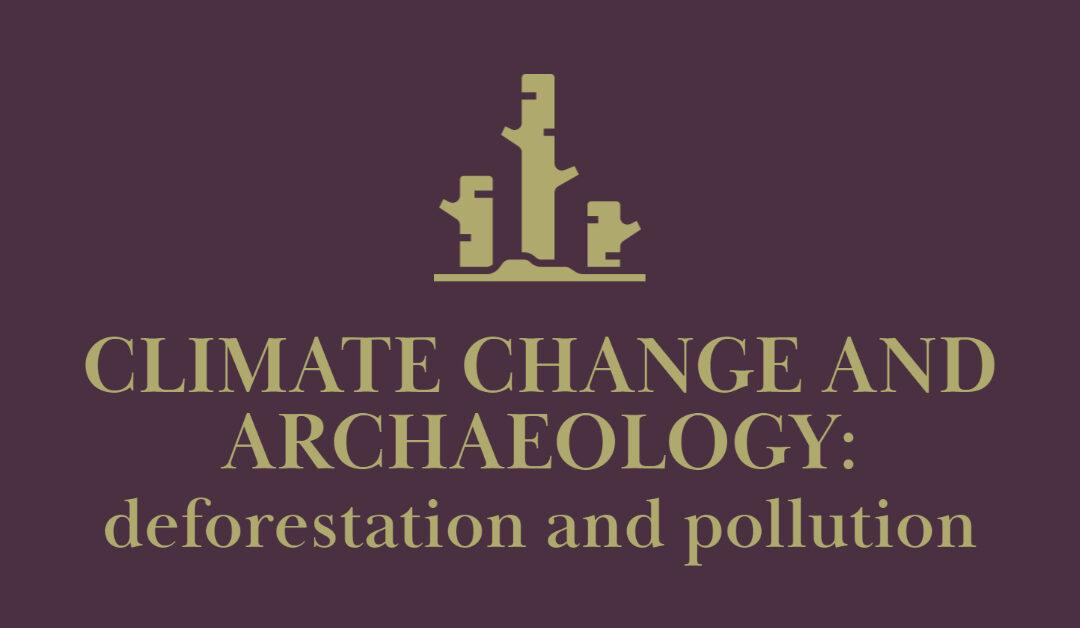 Climate changes pose a series of threats to the environment and the archaeology around the world. We’ve written about the big stuff—sea level rise, erosion, and extreme weather. However, another part of the climate change mess is pollution, ranging from trash litter left behind to much more serious additions like chemicals. There is also widespread deforestation that is changing the climate. This week, we will get into how different kinds of pollution affect archaeology as well as how deforestation is changing things as well.

Let’s start with the trees.

It’s a common misconception that deforestation is a modern issue with people cutting down entire forests, but deforestation is a far, far older problem that has caused civilizations to fall. Think about what the world looks like today. There is farmland, housing developments, and huge cities. In the empty pockets of space, there are forests. Not so very long ago, forests were much more widespread, being the rule rather than the exception. However, through time, people have cut them down or altered the forests in different ways.

Cutting down a forest can permanently change a landscape. For example, in antiquity, Lebanon was famous for its trees. The trees were 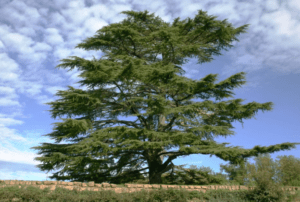 cedar, a strong a beautiful wood that was highly prized. Lebanon was also near countries that had no access to their own forests, like Egypt. Archaeologists have found stories of Egyptian pharaohs purchasing massive Lebanese cedar trees to serve as columns for important buildings. The Egyptians were not the only ones who prized the country’s resources. Other countries did as well, to the point that the forest were in significant danger of disappearing by early on in the Roman Empire. To help alleviate the pressure, Roman Emperor Hadrian ordered that part of the Lebanese forests be protected.

Deforestation is always damaging to the local environment, but when it happens within a large landscape there are other areas people can go to food wood. Deforestation in an island environment, however, is a far more serious issue since there is nowhere else to go for that resource. One island, in particular, is one that archaeologists believe suffered from deforestation that eventually led to the decline of the civilization. Rapa Nui, or Easter Island, is thought to have first been discovered by Pacific Islanders in 1200 CE. There are several theories as to exactly what happened to all the trees. One is that people cut them down to make room for agriculture and this led the soil to lose important nutrients eventually leading to crop failure. Another theory is mass burning events. A more recent idea revolves around stowaway rats that came to Rapa Nui from outrigger canoes. The rats quickly populated the islands and ate tree seeds, preventing new growth, and ultimately leading to deforestation. Regardless of exactly what happened, once there were trees and then there were none. Trees protect islands from erosion and aggressive weather. They also input important nutrients to the soil that are essential for agriculture and provide an important food source from their fruit. Trees are especially important for some island cultures because they are a source of wood for canoes and boats needed for fishing, hunting, and travel.

Another island that suffered from widespread deforestation is Aotearoa or New Zealand. People first arrived and began living on the 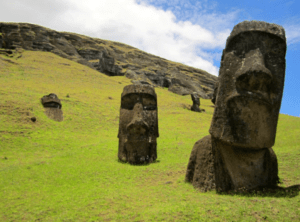 island around 1200 CE. Similar to Rapa Nui, there are several different hypotheses about how deforestation happened, though it was not as widespread or devastating as on Rapa Nui. Slowly over the centuries, with strategic burning to make room for agriculture, the forests of New Zealand covered less and less of the island. Today, however, there are successful conservation efforts to protect the remaining forests.

Today, deforestation is one element that helps accelerate the effects of climate change by increasing the rate of erosion and taking away organisms that filter carbon dioxide out of the air. Deforestation has another unintended side effect: revealing archaeological sites.

At first, this may seem like a dream come true. Dense forests make it difficult for archaeologists to survey or excavate in an area, and advanced technology to penetrate a forest’s canopy and map the landscape is very expensive. However, deforestation is not only ridding the environment of trees but also churning up the soil and destroying archaeological context—this is much more like an archaeologist’s worst nightmare. These reveals from deforestation is more like an archaeologist’s nightmare. In the process of removing the forest vegetation, the sites are usually damaged by the heavy duty machinery. Additionally, the uncovered sites are far more visible than they were before, leading to an increase in looting. Archaeologists are trying to keep up with what is discovered, but as deforestation increases, so does the rate of sites being damaged and then left out in the open. 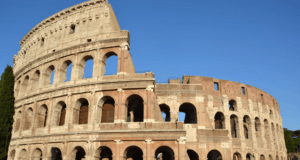 Pollution can come in many forms, ranging from trash littering to carbon dioxide being added to the atmosphere. Trash pollution may not seem like a big problem for archaeologists, but it can be an issue on surveys and other types of field work. Pollution can add to the workload by obscuring a landscape. It is also a problem for maritime archaeologists who have to deal with pollution in the ocean as they are working to survey or excavate a site.

Other types of pollution have huge effects on archaeology. Air pollution in cities can adhere to archaeological sites in the area. This pollution damages the sites and makes them look dirty and the cleaning process that degrades the sites over time. One example of this is the Roman Colosseum, which had decades of soot and grime from the city’s air pollution. It took millions of euros to clean it. The colosseum is not alone in this regard. There are archaeological sites in many major cities that must undergo the same process.

In addition to the air pollution of cities, there are more damaging things emphasized by climate change, like acid rain. Acid rain is when pollutants mix and create acidic rainfall, which can do major damage to more delicate pieces of archaeological sites. Things like inscriptions or carved images can corrode away, an increasingly concerning issue at many Central American sites with incredible Maya artwork as well as sites like the Taj Mahal.

Finally, the soil itself is also becoming more acidic with time. Acidic soil is particularly damaging because many archaeological sites are underground. The acidic soil can eat away artifacts, causing certain delicate types, like textiles, to disappear. It can also weaken the foundations of ancient buildings, making them more likely to fall.

These problems may not seem as pressing as sea level rise or extreme weather patterns, but they are issues further exacerbated by climate change negatively affecting cultural heritage around the world. While not all of these problems can be fixed immediately, some cities are working towards creating less air pollution by incentivizing public transportation and leaving the car at home. These small and simple fixes can positively affect archaeological remains in big cities and just nearby. Additionally, while deforestation can have damaging consequences, it is a process that is uncovering huge city complexes in the middle of jungles previously thought to be uninhabited. These new discoveries help us better understand the past and the cultures that once lived in the area.