Let’s Go to the Movies! Indiana Jones and the Last Crusade 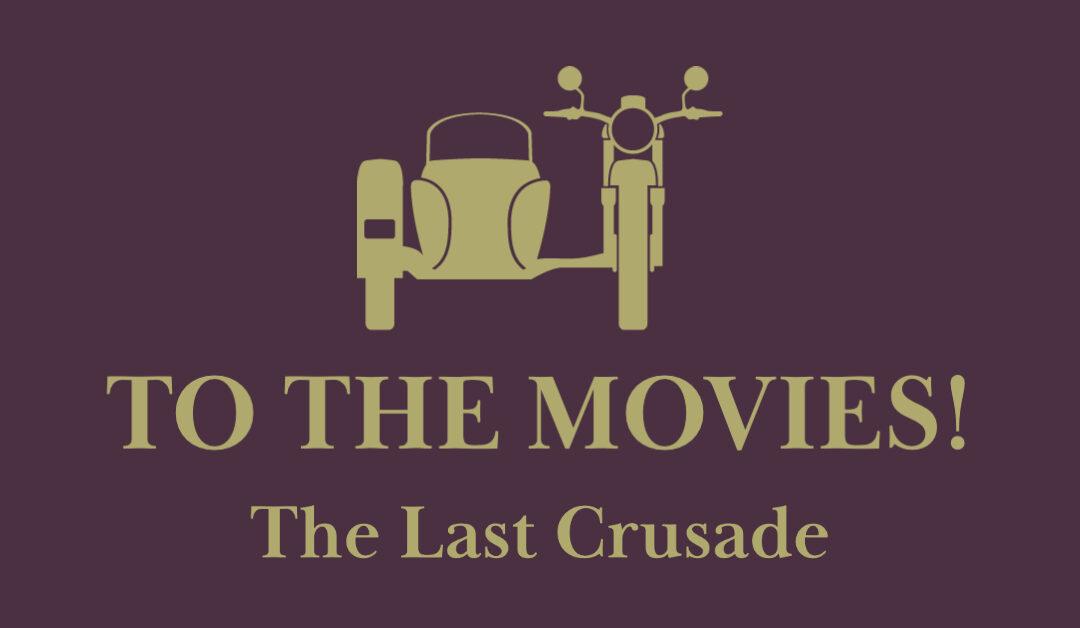 Indiana Jones and the Last Crusade is a popular favorite of the series, combining fan’s favorite things: action-packed adventure, a focus on some famous archaeological artifacts and lore, puzzle-solving, and Sean Connery. For all of its memorable scenes, the movie highlights a few more serious topics, so let’s take a deeper dive.

It Belongs in a Museum 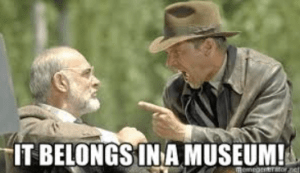 …Does it? Museums are a source of debate in archaeology. Museums have been around for thousands of years, though they did not always look the way they do now. An idea invented by the Greeks, a museum was not a building full of artifacts, but a place for quiet contemplation of humanity’s place in the world. It was an area for philosophers and great thinkers to gather. A quote by Phillippe de Montebello describes the museum’s historic function throughout time: “A museum is the memory of mankind.” But who’s memory?

Historically, modern museums gathered their collections in various ways, but a particularly popular way was funding expeditions to places around the world. These museum travelers bought, excavated, or sometimes stole that nation’s cultural heritage. Remnants of this practice can still be seen today in institutions around the world. In the United States, museums also took objects from Native American groups, often displaying human remains and cultural heritage in disrespectful ways.

Many museums recognize their past faults and are working towards correcting them. These improvements have started across the United States, with institutions revamping their collections and collaborating with Native American groups to help design new exhibits that are accurate and respectful. One example of a museum doing this is the Field Museum in Chicago.

One of the most memorable lines of the entire Indiana Jones series is “It belongs in a museum!” This line might reference a desire to keep the artifact safe and in a location where research can be done, but it also indicates a wider attitude that was still popular in the 1980s when the movie was filmed. The depiction of an archaeologist trying to find artifacts and house them in a museum, or institution is very accurate. It was only fairly recently that the museum and archaeological communities shifted away from taking artifacts out of their area of origin. Now it is common practice to leave excavated artifacts in their homeland with the governments or institutions for future research.

Early in the movie, Indiana visits the home of Walter Donovan, a wealthy American businessman, archaeology enthusiast, and collector of artifacts relating to the Holy Grail. Private collections like his 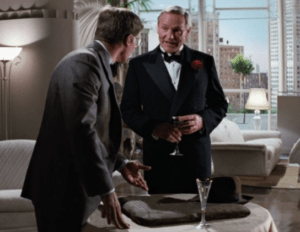 Donovan and Indy looking at a piece of his private collection

can lead to serious artifact damage. One of the first artifacts shown in the movie is an illuminated bible. In the movie, this book is open and propped up vertically. It is under a harsh light in a room with many giant windows that allow sunlight to stream in, and it is out in the open where visitors can touch it. Bibles like this one are probably printed on paper and the words and pictures painted on by monks. Paper degrades quickly if not kept in a humidity and temperature-controlled climate. A room with uncovered windows means temperature fluctuation. This lack of regularity will cause the pages to crack and break. The harsh lighting in the room and sunlight will cause the ink to fade until it is gone. Propping it up will cause the spine and bindings to degrade and fall apart. These processes are accelerated by visitors touching and leafing through the pages, leaving harmful oils onto the delicate pages.

In addition to likely degradation, removing artifacts from their context also means the permanent loss of information from the archaeological record. During excavations, archaeologists keep meticulous records of their actions to record every detail. Some of this information include an artifact’s exact location so the archaeological site can be virtually reconstructed during analyses. An artifact all alone only tells archaeologists limited information, but when it is combined with its location to other artifacts, It can tell a much richer story. These detailed notes ensure as little information is lost as possible. Archaeology is an inherently destructive act, and it is only done when it is the only way forward. When people take an artifact out of context, it loses a great deal of important information an archaeologist could have learned by observing the surroundings. 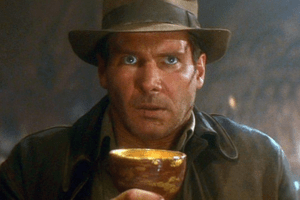 Indiana Jones and the Last Crusade focuses on a father-son quest for the Holy Grail. A disclaimer before I get started in unpacking the archaeology from the movie. While I am an archaeologist, I am by no means an expert on any of the religions of cultures depicted. As with all of our blogs, I have done the research to present the best information I could find.

The Holy Grail, similar to the Ark, is a famous religious relic that has been “lost” for thousands of years. There are many different interpretations about the Grail. However, the most widely accepted is that the Grail was the cup that Jesus Christ drank from during the Last Supper and then was used again by one of his supporters to collect his blood during his crucifixion the next day.  Like with other important religious relics from history, it turned into legend as years passed. Christianity characterizes items with a direct connection to Jesus and his life as holy. As a result, many churches made efforts in earlier times to secure particular objects, like pieces of the cross, the death shroud, or the human remains of important early Christian figures because the items increased the holiness of the church. The Grail is seen as especially important because it was used directly by Jesus himself and served as a vessel for his blood. A twofer, if you will.

There are around two hundred different cups around the world that claim to be the Holy Grail. Most recently, two historians claimed to have discovered the Grail in a church in Spain. Like many archaeological artifacts, there is no way of proving that the cup is the Holy Grail or if such a thing ever existed. The belief in the cup’s ability to give the owner everlasting life has led to hundreds of years of goose chases. The Grail is not the only object that people have scoured the planet for, other objects or sites, like the Fountain of Youth or El Dorado, have also been searched for throughout time.

This week, Indy was back to battling Nazis, just like those who were part of the Monuments Men in WWII. In the 1940s, Nazi’s were interested in stealing art to build up their own museums with the great works of art of Europe. In modern times, we face a far more dangerous problem.

Rather than preserving art to build museums that increase a regime’s legitimacy, certain groups have recently favored destroying archaeological sites or places of cultural importance to prove a point. Think of the Buddhas of Bamiyan that the Taliban blew up in 2001 or the ruins of Palmyra that ISIS destroyed parts of in 2015.

With changing conflict and enemies, how would a modern Monuments Men have to change from its previous iteration to best protect the archaeological treasures of this world?