Let’s Go to the Movies! Indiana Jones and the Kingdom of the Crystal Skull 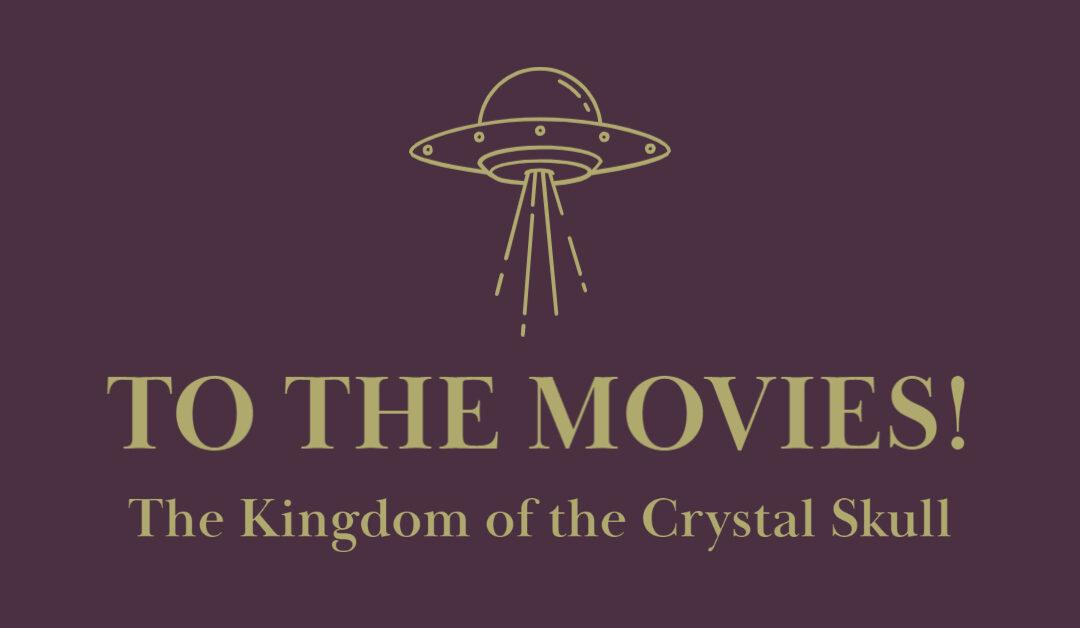 Indiana Jones has stood as a symbol for archaeologists since the 1980s. While the movies sometimes inaccurately portray the profession, this movie is full of historical fabrication.

There are many TV shows and books that seem innocent. After all, science is a profession of following curiosity to an end conclusion. The problem is that much of this TV and book content is neither 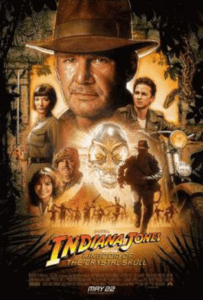 scientific nor historic. Authors and creators instead rely on the use of pseudoscience or pseudohistory, which do not use the scientific method. Science is a practice based on fact and known variables, while pseudoscience is speculation based on fiction. History is the documentation of evidence from the past, while pseudohistory is treating myths or legend as fact while ignoring documented sources that refute the ideas. For example, one pseudohistorical idea is that a single culture built many major sites, like Stonehenge and the Egyptian pyramids, though archaeologists and descendent community members have no evidence to support this idea. A popular pseudoscience theory is that the Earth is flat, not a sphere, though there is a great deal of scientific evidence that refutes this idea.

Here is a way to tell the difference: the scientific method starts with gathering facts to learn more and then make a conclusion based on all available facts. Pseudoscience and pseudohistory start with an idea, like a myth or legend, and only gather points that specifically fit that idea while disregarding any fact that does not agree.

Pseudohistory and pseudoscience present their ideas as fact and claim many in the field agree. They do not go through the scientific method or publish peer-reviewed papers. The belief that aliens built certain ancient sites is an excellent example of both pseudohistory and pseudoscience. There are many books and TV shows that build on these pseudo-ideas that aliens are responsible for some of the architecture of the ancient world. These sources almost exclusively target sites, cultures, and populations that are non-European. This focus subtly promotes a Eurocentric worldview and racist ideology centered on superiority over others. The Colosseum is not discussed as a landing site for a flying saucer. The Parthenon is not claimed to be a temple by Martian Men. Aqueducts running through Spain, France, and Italy are a brilliant Roman invention. German castles and cathedrals are left alone as real people’s architectural marvels, as are prehistoric rock structures in France and England. There are countless sites in non-European countries that look similar or provide similar function that are not credited to that culture’s ingenuity, but rather to that of extraterrestrial architects.

The most common structures attributed to extraterrestrial creation are the Great Pyramids of Egypt, Chichen Itza, Tikal, the Nazca Lines, and the Rapa Nui Mo’ai. These incredible works of art and architecture are not attributed to the cultures and people that built them, but credit is given to myths. Ancient cultures are not targeted equally by alien theorists. Historically underrepresented 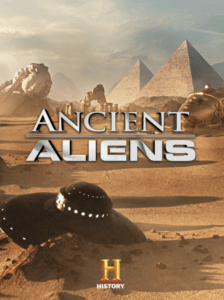 peoples from non-European countries are condemned far more often than European ones.

Ancient Aliens is one of many shows and books that discusses alien involvement in human ingenuity. Of the 160 relevant episodes created, less than 10 episodes specifically referenced white, or European, cultures. Of this 6%, only 2 episodes discuss the idea of ancient Greek sites being built by aliens instead of humans. This means that 1.25% of the show scrutinizes European culture and achievement. The vast majority of episodes casts suspicion and doubt on non-European cultures around the world, ranging from India to Polynesia to the Americas to Africa.

Watching these shows or reading these websites or books can be an amusing pastime, and scientists need to keep asking questions. However, what many do not realize when absorbing the content is the underlying and emphasis on Western or European superiority over the rest of the world.

Indiana Jones and the Kingdom of the Crystal Skull

The movie takes place in the late 1950s, around 15 years after the Last Crusade. Indy is still an archaeology professor but this time he is going toe-to-toe with Russians, not Nazis. The movie starts with a kidnapped Indy being forced to find an alien corpse in a secret government warehouse. After escaping, Indy meets up with his new sidekick and begins searching for Akator, more commonly known as El Dorado, and a crystal skull. 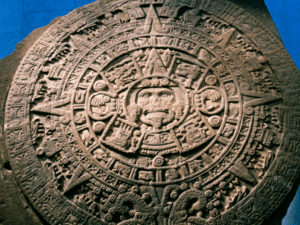 They fly to Nazca, Peru and walk through a cemetery where they eventually the crystal skull. This is the second Indiana Jones movie to depict South American cultures and archaeology. In Raiders of the Lost Ark, the movie uses artistic styles of many different cultures. Even if unintentional, this sweeping generalization emphasizes the misconception that the cultures of South and Central are not unique and complex, but the same.

At one point, Dr. Jones crawls on a stone that acts as a seesaw to balance between the hidden tomb and the rest of the site. This stone appears to be the Aztec calendar, a culture with a very different cosmology from that of the Nazca culture in Peru. Later in the movie, we see the Aztec calendar stone again in the alien room on the floor. This Nazca site is not the only time in the movie 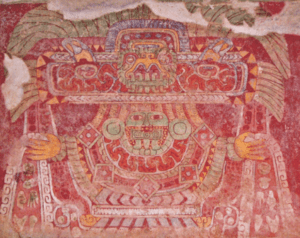 Great Goddess of Teotihuacan, also known as the spider woman

where South and Central American cultures are mixed. Later, Indy and the team travel by river to Akator and enter a cave within the Brazilian rainforest. Despite their location, the artwork on the cave walls is appears to be of a Mayan style. The Mayan civilization once ruled areas of Central America, thousands of miles away. Later in the movie, they get inside a stone building where the crystal skull was taken and aliens were found. Around the aliens is what looks like the distinctive Mayan script. Another Central American culture is referenced through the murals behind the alien skeletons. These

Example of Mayan art and writing in a mural

murals look very similar to the murals of the Great Goddess of Teotihuacan—a culture that thrived around 1000 years before the Aztecs in central Mexico. Like in Raiders of the Lost Ark, unique cultures that span thousands of years and continents appear to be mixed together.

Let’s talk about that skull! Crystal skulls do exist, but they were neither made by aliens nor authentic archaeological artifacts. The only crystal skulls that exist have been found are the Mitchell-Hedges skulls, which were made by a British explorer. Mitchell-Hedges claimed that his daughter discovered the skull in modern-day Honduras and argued it was authentic. Like others found, the crystal skull was made with modern jeweler techniques and instruments. They are not Mayan or Aztec artifacts, as they have claimed to be.

And now for some fun facts:

The Monuments Men was an organization created with the specific purpose of tracking down stolen Nazi art and artifacts. This mission didn’t stop when the war did, as there were still thousands of pieces of artwork missing. As works were found, they were returned to the museums and other institutions from which they had been taken. A few examples of these are Mona Lisa and the Ghent Altarpiece, some of the greatest works of European art. Not all the pieces of art were taken from museums. Some were taken from families, and many have never been returned. Recent court cases are dealing with this subject and its complicated history.

Where do historical artifacts and artwork belong? If the Monuments Men were reestablished today to find artifacts from a looted European museum, would it be right to return all of the stolen pieces? Museums contain some of the greatest treasures of humanity, and the rules behind their displays are complicated. Many artifacts on display at famous museums were taken from their original home. Think of the Bust of Nefertiti in Berlin or the Parthenon sculptures in Britain. Should these go back to their original homes? Many countries would argue “yes,” and Egypt went so far as to publish a list of cultural heritage items it wanted back.

Should a group like the Monuments Men be recreated to help deal with these issues today?

Also, we have a new book to announce! For our next blog series, we will be reading Pathway to a PhD by Dr. A. Jose’ Jones. This autobiography tells the story of an incredible man who became one the first certified African-American Divers, earned a Ph.D. in Marine Biology, and founded Diving With a Purpose. This organization protects, documents, and interprets sunken African slave trade ships. This book highlights hard work, dedication, and brilliance while touching on a little-discussed facet of archaeology: sunken slave trade ships in the Atlantic.