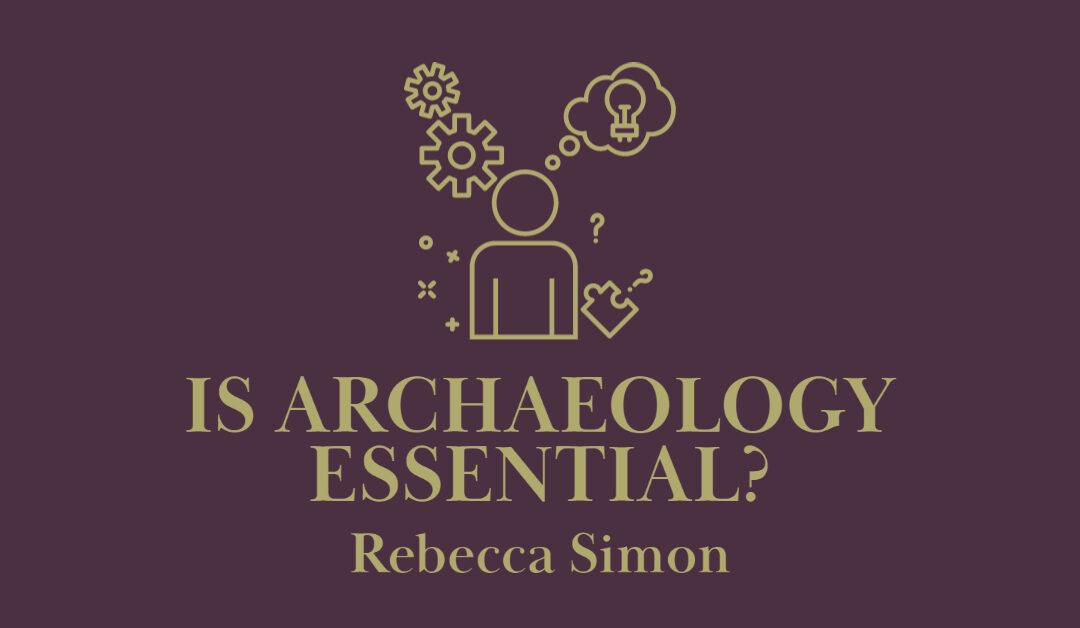 When asked to reflect on my career, I decided to read the cover letter I wrote to get my current job as Colorado’s Assistant State Archaeologist. Going back to that cover letter, I am actually a little embarrassed by some of the weird phrasing and odd statements. Oh well.

In 2018 I wrote, “My ideal job includes conducting research in tandem with public outreach, and educational programming. I completed my Masters of Arts degree at Colorado State University with a project that focused on integrating archaeology into K-12 education. In addition to my master’s, I have Bachelor of Arts degrees from Pennsylvania State University in Anthropology and English. My archaeological experience geographically includes the American Southwest, western High Plains, and the Rocky Mountains. I also have international survey experience in southern Jordan. My research interests include public outreach, archaeology education, contact period studies, early mining sites, and Southwestern ceramics. Since 2008, I have been professionally involved in over 20 archaeological projects in Colorado, Wyoming, Utah, and Kansas, for multiple cultural resource management firms. My duties on these projects included archaeological survey, excavation, remote sensing, artifact analysis, archival research, curation, database entry, report writing, site form production, quality control, teaching, and supervising.” 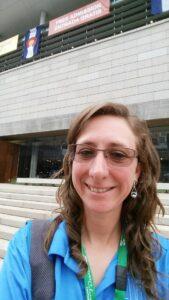 In 2013, I was an education intern for History Colorado. Little did I know that 5.5 years later I would be the Assistant State Archaeologist starting on the 142nd anniversary of Colorado becoming a state, August 1, 2018 (History Colorado Center; Denver, CO) (Photo credit: Becca Simon)

Dr. Dean R. Snow at Penn State told us as freshmen that if we wanted a job in archaeology, we needed to go into cultural resource management (CRM). About ten years ago, archaeologists estimated that as much as 90% of archaeological studies occurred because of CRM, an industry dictated by federal, state, and local laws in an effort to protect and manage archaeological sites, historic places, and artifacts. In 2008, I got my first CRM job with the Center for Environmental Management of Military Lands (CEMML) working on Fort Carson, an US Army base in Colorado Springs, CO, after the training grounds experienced a large fire and impacted many sites.

A lot happened in ten years, but my cover letter still reflected the needs and focus of CRM – geographical regions of where I worked, how many projects I was a part of, and skills I gained. However, my passions did change and I tried to express that. “My career goals and passions revolve around public outreach and archaeology education. I am active on several committees and task force groups focused on furthering the dissemination of archaeological research…”

Thankfully, some colleagues guided me to resources explaining anthropological archaeology and the journal devoted to the study of it. The Journal of Anthropological Archaeology states that “the discipline served by the journal is characterized by its goals and approach, not by geographical or temporal bounds. … These subjects appear… as examples of cultural organization, operation, and evolution, not as specific historical phenomena.”

When I started my career, I had a limited understanding of public archaeology. By the time I wrote that letter, I knew there was a little more to it: “Participating with the public provides a real-world perspective to archeological research and makes me a better professional. Without acknowledging the many audiences and consumers of our research, the archaeological profession becomes disconnected and disrespected. My goal is to never let that happen.” 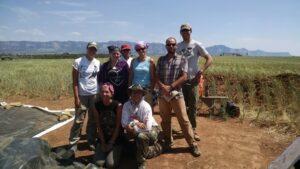 As a field and supervisory archaeologist at Crow Canyon Archaeological Center, I participated in many facets of public archaeology and archaeology education. Teaching the college field school was like taking a glimpse into the future. Many of my students have gone on to be much better archaeologists than I ever will be! (Cortez, CO; June 2016) (Photo credit Becca Simon)

Today, I work in a subdivision of Colorado’s State Historic Preservation Office, the Office of the State Archaeologist which issues permits to all individuals and organizations doing archaeological fieldwork on non-federal public lands, or private lands where the landowner requests a permit. Archaeology is not commonly considered an essential activity. Archaeologists do not cure cancer or study rocket science, which makes the public see it as not as necessary. In 2020, archaeologists tied to universities, museums, and other cultural institutions experienced field school cancellations, laboratory closures, and exhibit installations rearranged because of COVID-19. You might think that with fewer archaeological projects, there would be fewer permits to issue, but that was not the case. In Colorado, CRM archaeologists continued to be busy with fieldwork, report writing, and proposal requests connected to infrastructure. The internet blossomed with memes, blogs, and other social media content, including images of archaeologists in bandanas walking along distant transects, heralding the tagline, “social distancing since 1966” (when the National Historic Preservation Act came into law). Even so, public health and safety measures made even the most socially distant of industries rethink how they do business. CRM archaeology projects often include carpooling to job sites, staying in hotels, hovering over the screen of a GPS unit or tablet (and the bright sunlight preventing anyone from actually seeing anything), hiking in uneven areas with a high potential for snakes and ticks, or any number of other circumstances employers warn new hires about. Changing the way CRM companies do business for the safety of employees and others came with a cost that not every project or even every company could juggle.

“Essential” became an important word in 2020. What if someone said, “archaeology is essential?” As an alternative to traditionally produced history books, archaeology provides an intimate way of learning about the past and instills a connection between the past, 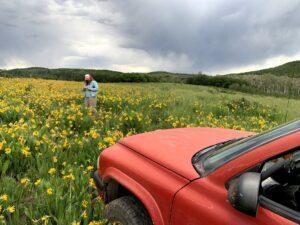 Co-worker and friend, Sarah Rothwell, takes some time to check out wildflowers after a day of teaching and archaeological survey in southwest Colorado, July 2020. (Photo credit Becca Simon)

present, and future. Whether you are fighting to keep the Washington Monument standing upright on the National Mall or stop the destruction of a lithic landscape during the construction of a major pipeline, the past is important. Laws, regulations, and permits exist because there is a great need for professionals who can ethically, responsibly, efficiently, and legally protect and manage cultural resources. While not exactly the same thing, the mentality behind stay-at-home orders were arguably similar to ethical CRM. Asking hard questions is important for humanity to grow with understanding, appreciation, respect—and maybe even one day—equality.

Archaeology is not unique in that it contains a complicated and sometimes down-right awful historical context. Collection policies, research questions, treatment of human remains are all riddled with histories of racism. Last year, in the wake of protests and calls to action, national institutions such as the American Anthropological Association, the Society for American Archaeology, and Archaeological Institute of America, representing archaeologists on many platforms made formal statements in regards to the discipline needing to do better at fighting racism. We need better representation throughout the discipline. Though, before we can properly “represent”, the discipline needs to address the practice, presentation, and most importantly the impact of archaeology on all peoples as people, and not just research subjects.

Part of why I am so connected to Project Archaeology is that I am not necessarily fine with just doing archaeology. I am compelled to do it ethically, effectively, and with meaning. Archaeology logistically grew out of colonialist constructs. Appreciating and understanding the past did not. Our efforts as archaeologists need to focus on the latter in order to grow.

While few, archaeological projects have resulted in notable resources for educating youth about racism and inequality. Project Archaeology has not one, but three “shelters” in their acclaimed shelter database that uses archaeological data in tandem with oral histories representing African American communities – the Poplar Forest Slave Cabin, a Tabby Slave Cabin, and a Kentucky Shotgun House (with data from the Davis Bottom community). The Kentucky Shotgun House was put together by the Kentucky Archaeological Survey, who had their own issues with being “non-essential”. In a presentation given at the Society for American Archaeology meetings in 2017, Dr. Gwynn Henderson (Education Director for the Survey), noted that when piloting the lessons, the teachers involved expressed that the unit provided a space for children to discuss race in a less distant and intimidating context given the integrated Davis Bottom neighborhood. While these resources are a far cry from the depth archaeologists must make in the fight against racism, they certainly are not bad places to start.

As I continue to learn and grow as an archaeologist, I am trying to better reach the world around me. I still call it a pound sign, but I am getting better at the “hashtag” tool. In 2020, every time I dealt with a new permit application, I thought #essentialarchaeology.  This pound sign, to me, addresses the question, “Is archaeology essential?” The pound sign also embraces the statement, “Archaeology is essential.” I often hear that I am still young and that I have a long career ahead of me. I am not particularly young, though I may have a few more years as an archaeologist. Quarantines, lock-downs, and social unrest caused many of us to slow down and reflect on everything. Reflecting on a decade plus of being an archaeologist makes me think that archaeology, in the appropriate context, is essential. Even in a pandemic. So let’s keep at it.

(FTR, Twitter hasn’t blown up #essentialarchaeology yet, so maybe there are some tech-savvy folks out there who can make this happen.)

A fun reminder: our book club book for our next series is Plundered Skulls and Stolen Spirits by Dr. Chip Colwell! Check it out next week with our first post in the new series.