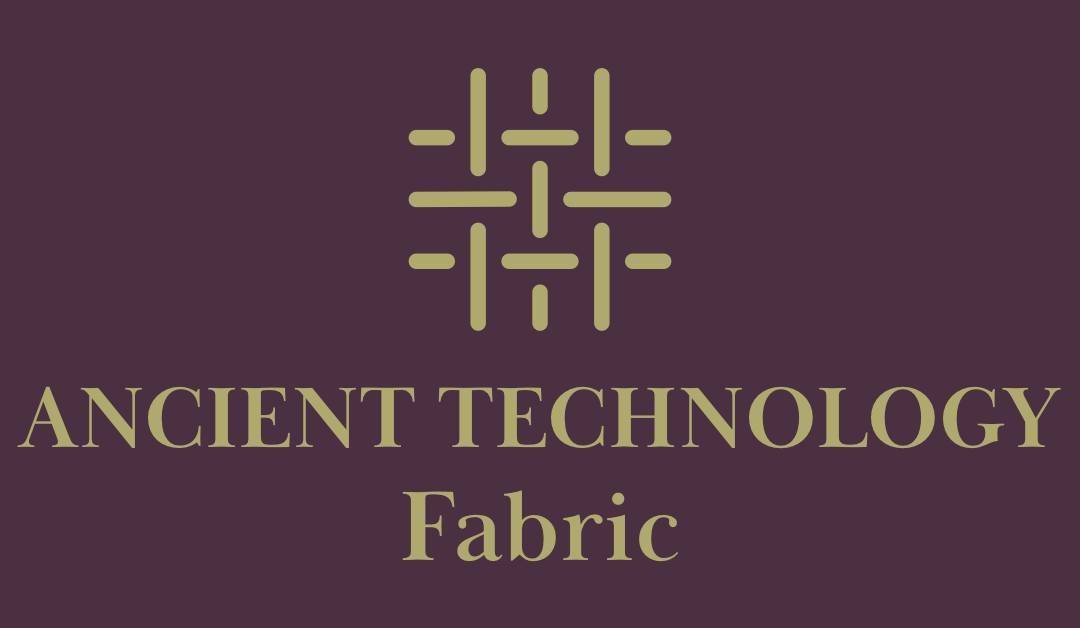 I did not learn to create in a bubble. Learning to bring together strings of yarn was first introduced to me when my grandmother taught me to crochet. Groups of supportive women then helped me expand my skills while I lived in Alaska in my 20s. In Alaska, I learned to spin yarn from wool using a drop spindle, and eventually, I graduated to a spinning wheel. I even tried my hand at weaving last year. Every time I pick up some form of fiber arts craft, I think of all the hands that have done this before and the deep history 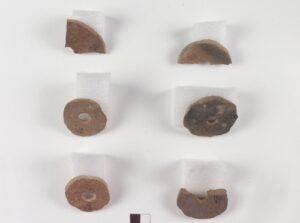 behind the simple but critical technology. Massive woolen sails allowed the Vikings to move across the globe. Small cocoons inspired an enormous human migration route that’s very name is based on the fabric – the Silk Roads. From the spun cords made by Neanderthals to the fine linens used to wrap Egyptian mummies, fabric has had a vital place in human life.

When archaeologists find fabric or evidence of textile production, it is a special occasion. Why? Artifacts related to textiles do not stand up to the test of time like stone or metal. Most items used to spin and weave of yarn are made of wood and fiber. This type of material only preserves when the conditions are right, and those conditions are rare. However, there are a few fabric production parts that remain when the rest has decayed. The weights used in drop spindles to spin fiber into yarn and weigh down the warp fibers in a weaving loom tend to be made from materials like stone, bone, and ceramics (Image 1). So how long have people been spinning a yarn? Evidence from the Abri du Maras site in France suggests Neanderthals had fiber technology between 41,000 to 52,000 years ago. Archaeologists found a 3-ply piece of cord made from inner bark fibers. This tiny piece of cord opens the door to the idea that Neanderthals had the technology to create ropes, bags, mats, and clothing. Weaving has also been credited as an integral part of the explosion of human creativity archaeologists have found evidence for in the Upper Paleolithic(28,000 to 20,000 years ago). Venus figurines depict clothing and pottery fragments have imprints of woven textiles from this time. This early archaeological evidence shows that humans have had the technology to spin fibers into yarn for a long time. 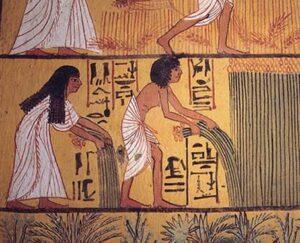 The fine linens of ancient Egypt are legendary. The light textiles that draped bodies during oppressive heat and carefully wrapped the bodies of mummies would not have been possible without flax . Flax is a flowering plant that goes through a laborious process to become the fibers that can be spun and woven in linen (Image 2). In the tomb of Egyptian official Meketre from the Middle Kingdom (2055-1650 BC) were small wooden figures that depicted the daily lives of Egyptians. One of these figures shows women in the process of rolling spliced flax stem fibers on the ground, then using spindles to spin them into yarns, and finally weaving the yarns into linen using floor looms (Image 3). This model, along with scenes on tomb walls and images in texts, has allowed archaeologists a peek into how Egyptians created linen.

Looms have the advantage of being able to make larger pieces of textiles. They provide a way to hold the warp (vertical) thread in 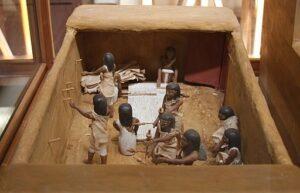 place so that the weft (horizontal) threads can be woven between the warp. The ground or floor loom in the Meketre model was used until around 1500 BC, when the vertical loom was introduced. The Egyptian vertical loom was unique because it used two beams to pull the warp fibers tight. Most vertical looms were still using stones that dangled from strings that were secured to a higher beam. Images of these vertical looms show it took two women to operate the loom (image 4).

Very little is known about the textiles that everyday people wore because many textile discoveries come from the tombs of Egypt’s elite. What we do know is that linen was interwoven with religious and social beliefs. Linen was considered pure, and priests wore 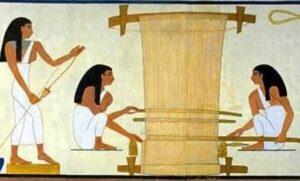 special linen robes during religious ceremonies. Mummies were wrapped from head to toe in fine linen bandages that had religious inscriptions. Linen was so important that many people buried it with the dead so they would have the invaluable resource in the afterlife.

The Road that Silk Built

The discovery of silk starts with the story of a woman. Leizu, also known as Xi Ling-shi, was a Chinese empress during the 27th century BC. She was having tea under a mulberry tree, and a silkworm cocoon fell into her cup. As the heat of the tea warmed the cocoon, it began to unravel. The empress was so taken with this silvery thread that she spread it throughout the garden. It is said that the empress is responsible for starting silkworm cultivation and silk production. For over 5,000 years, the Chinese monopolized silk production, and the world was hungry for the luxurious fabric.

The term “Silk Road” can be misleading as it consisted of not just one but many trade routes. Archaeologists continue to explore possible Silk Road routes and find evidence of cross-cultural exchange of goods between the East and the West. One recent find suggests that the Silk Road did not just cross the Gobi Desert and mountain foothills but also scaled the mountains into Tibet. Monks 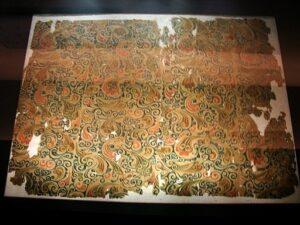 Image 5: An example of patterned silk from the Han Dynasty. Image from https://commons.wikimedia.org/wiki/File:Silk_from_Mawangdui_2.jpg

discovered an 1,800-year-old tomb in Tibet. The tomb contained many unique artifacts like a gold mask, bronze vessels, and tea buds. The most astonishing items were pieces of silk with woven Chinese characters wang hou, which means “king” and “princess.”

How were these prized silks made? Archaeologists recently uncovered miniature wooden looms in a tomb in Chengdu, China. These looms are the oldest known models of pattern looms in the world. Pattern looms could weave complex textiles, and the technology quickly spread West to Persia, India, and Europe. Discovering this model has given insight into many technological links missing in understanding the

When you imagine a Viking village, do you picture the sheep that were one of the most critical resources? These small and hardy creatures are responsible for the sails of the legendary longboats floating in the harbor. Archaeologists have excavated many longboats, but rarely do the sails remain. That was until a small church in Trondenes, Norway was renovated in 1989. The workers kept finding wads of old fabric stuffed between gaps in the roof and masonry. Luckily, someone decided to look at them before they were tossed and discovered that those scraps of cloth were parts of Viking sails. Archaeologists have studied the Trondenes fabric and learned about the weave pattens that Vikings used to make airtight sails. Some researchers have even used the information to recreate sails. Those recreated sails adorn the reconstructed ships at the Viking Ship Museum of Roskilde (Image 6). 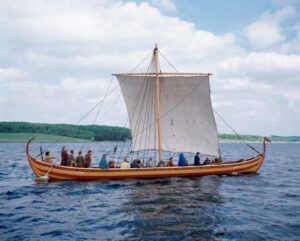 The archaeological record was key in learning how to reconstruct these vessels. Viking looms were immensely important because they were tied to protection and warfare. If a sail was damaged, it could take a year or more to replace. Even the Valkyries, female figures associated with who dies and who survives battle, are said to be weavers. The story of the Valkyries is pretty gruesome. In the poem, Darraðarljóð, twelve Valkyries are seen with their looms before a battle weaving the fates of the warriors. The thread is made of intestines, and the loom weights are heads.

Even though textiles are an  ancient technology that are difficult to find, the small understandings we do have tell a story that involves the hands of many women. It also shows how critical textiles have been to people’s everyday lives, from clothing to religion and even in death. One thing that has preserved is the communities of people who have passed the knowledge of spinning and weaving techniques through countless generations. This intimate transmission makes fiber creations, and the ancient technology used to make them all the more precious. Next time I work on the loom, I will think about all the people who came before.

Our book for this blog series is The Golden Thread: How Fabric Changed History by Kassia St. Clair. In the book’s opening, the author discusses many of the stories and legends about the creation of fabric and textiles. She also discusses how linen had a special place in ancient Egypt’s religious ceremonies.

Do you encounter fabric that is specific to a ceremony, religion, or special event? How old do you think that ritual is, and what tools are used to make the fabric? In what ways do those tools resemble the ones that people used thousands of years ago?