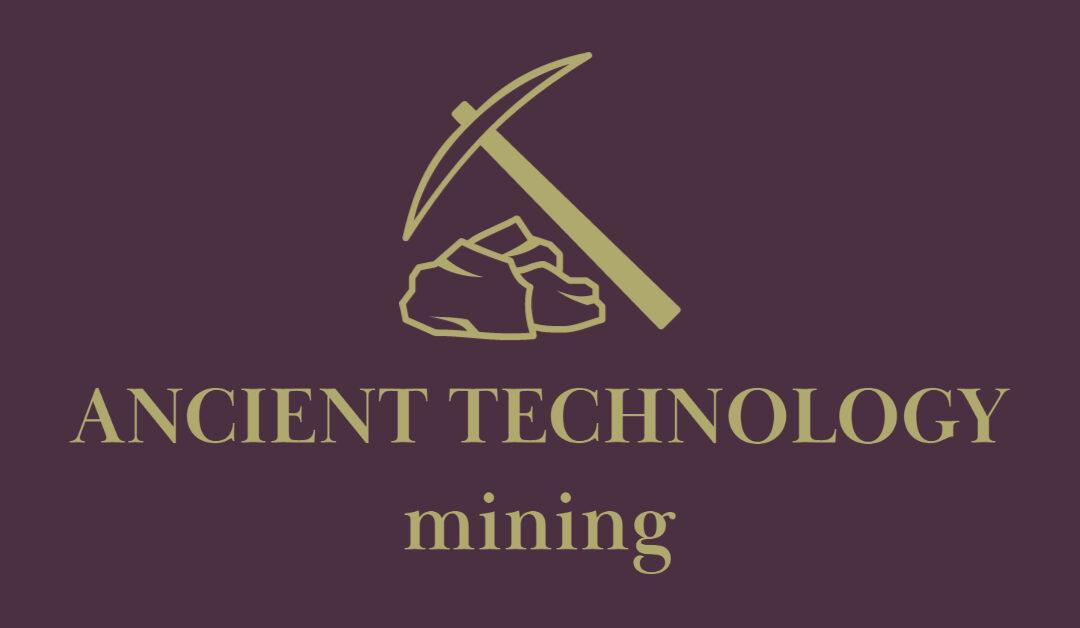 The idea of ancient mining probably fills your head with images of golden Egyptian sarcophagi, the massive stones in the crown jewels of England, or Roman marble statues and buildings. These are all great examples of ancient mining, but there are many from around the world. Today we’ll be covering how long humans have been mining and some of the most brilliant examples of human digging and creation that are scattered around the planet.

Did you know that humans didn’t even invent mining? Neanderthals did.

A recent archaeological discovery suggests that early hominids were mining flint for tools as far back as 300,000 years ago. Flint was a very important stone because it is brittle, this allowed people to break it and to sharp tools. Breaking in this way is not a quality the everyday rocks you see outside have. This very early mining was not the large-scale efforts that were present in more modern historic era, but the archaeological evidence suggests a deliberate digging and removal of surface rock to access flint below. More recently, evidence suggests Neanderthals in Europe also did some rudimentary mining to access red ochre, a natural pigment that could be used as a dye or paint. There is also evidence in modern-day Armenia that Neanderthals were mining obsidian, likely for sharp tools and perhaps even for jewelry. 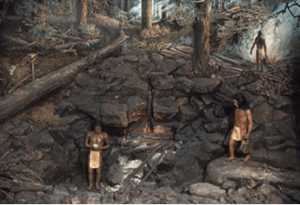 Miniature Diorama of an Archaic Copper Mine, formerly at the Milwaukee Public Museum

Archaeological evidence has shown that Native Americans living in the Midwest were some of the earliest peoples in the world to mine metal and turn it into tools. Archaeologists think that as long ago as 8500 years, people in Wisconsin created projectile points and other weapons out of copper. There are massive copper deposits in the Great Lakes area, and over thousands of years ago, people living in the area developed advanced technology to melt the ore and fashion tools from it.

These tools included everything from weapons like axes to fishhooks to everyday items like awls. There are tens of thousands of these artifacts that archaeologists can study to better understand the technology and culture of the time. Archaeologists believe that early copper mining was simply collecting stray nuggets from river beds, but it quickly turned into real mining from rocks along the shores of the Great Lakes.  People were also digging deep pits to extract copper as well. In addition to digging, thermal shattering seems to be a common way of mining copper. Thermal shattering is where people would light fires near bedrock to heat them up, apply water, and the resulting rapid temperature change would cause the rock to break and shatter, revealing the copper. Once copper was found and collected, archaeologists believe people just used annealing to form tools, or the heating of the ore to be hammered into the desired shape. Copper was very valuable, and archaeologists have found artifacts originally from the Midwest all across America thanks to the pervasive trade routes active thousands of years ago.

Polynesia is known for pristine beaches and coconuts, but not necessarily for its ancient architecture. Proudly standing on remote islands are two major structures: the Ha’amonga ‘a Maui in Tonga and the Moai on Rapa Nui.

The Moai are also known as the Easter Island Heads and dot one of the most remote islands on the planet. There are almost 1000 Moai statues that can weigh up to 86 tons and stand over 30 feet tall. They were all carved within several hundred years of each 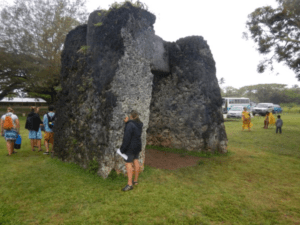 other, archaeologists believe between 1400 and 1650 CE. They are all also made of a material called tuff, which is a rock of compressed volcanic ash. The island of Rapa Nui is fairly small, with one major tuff quarry: Rano Raraku. The islanders used chisel tools to extract and carve the stone. Due to their immense size, moving them was both complex and difficult, so almost half of the Moai are still in the quarry, and roughly 10% are lying nearby. Archaeologists think these Moai were abandoned in transit. Tuff is a fairly soft stone, which allows it to be easily carved—no doubt why it was the chosen material for these monumental sculptures. Islanders would first carve the Moai while in the quarry and then chisel out the completed statue to free it from the bedrock.

Far less well-known than the Moai statues is the Ha’amonga ‘a Maui in Tonga. This giant structure was built from mined coral limestone, with each of the blocks weighing between 30 and 40 tons. There is a Tongan legend that the demigod Maui carved the blocks from stone on Wallis Island and rowed them to Tonga in a canoe. Archaeologists believe the monument was built by Tu’i Tonga Tu’itatui and served as an entrance to his royal compound. The trilithon, two stones supporting a third, is supposed to represent a shared burden, with the two supporting stones as people and the top stone the weight they share by working together. Coral limestone is created by the compressing and hardening of dead coral over time. It can be mined all over these islands with stone tools, but the quarries are often found near the coastline.

The Gem of Kings

Afghanistan has long been a land of crossroads. Ancient trade routes like the Silk Road passed through its valleys and mountains 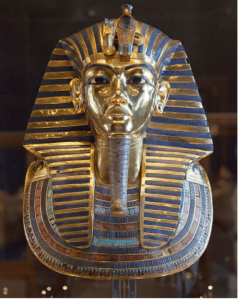 and Alexander the Great passed through on his ways to India. One fact you may not know about Afghanistan is that it was one of the few sources of lapis lazuli in the ancient world. It is thought that Lapis is one of, if not the oldest, gem-stones that people have mined. The primary mine in Afghanistan, Sar-e-Sang, has been used for around 7000 years. Lapis Lazuli was incredibly popular in the ancient world, particularly Ancient Egypt and Ancient Mesopotamia, because of the brilliant blue color that is rare in nature. It was used mostly in jewelry, but was also ground up and used as a coloring for paint or makeup. Lapis is challenging to mine because it can be found in harsh environments, and it is difficult to get it out of the surrounding bedrock. Removing lapis from the bedrock was primarily done with thermal shattering techniques. The goal was to have Lapis be in the rock that fell off the wall, and then miners would clean away the excess stone and take away the remaining Lapis Lazuli.

Obsidian is also known as volcanic glass because of its shiny, somewhat translucent appearance. In ancient times, it was incredibly popular because of its sharpness. In fact, doctors today have experimented using obsidian instruments for surgery. Obsidian is unique amongst stones because archaeologists can trace its exact location. Deposits are rare, and each one has a unique chemical signature. Archaeologists can use devices to trace the chemical signature to see where the stone was originally mined. Often, archaeologists can learn a great deal about ancient trade through this kind of test.

Obsidian is not a material that is easy to work with, and it is notorious for how difficult it is to shape because of its brittle quality.

Obsidian artifacts from deposit in Teotihuacan in the special exhibition: Teotihuacan: City of Water, City of Fire

Additionally, though it can have extremely sharp edges, ancient people all over the world used it for more than just weapons. For example, in the ancient city of Teotihuacan, obsidian artifacts have been found in the most incredible shapes that would have taken an experienced and expert artisan to create. Obsidian can be mined by finding deposits and veins in rock. Many mines usually have working areas on site as well, where people would take the stone that was recently mined and work it into tools or other desirable shapes. This type of rock occurs naturally in volcanic areas, like Hawaii and other Pacific Islands, the Western U.S., Central American, and many other locations.

Mining for rock, precious stones, or metal is something many human cultures through time have in common. It is a process that highlights human ingenuity and creativity. Turning rocks into giant sculptures, volcanic glass into religious offerings, copper into weapons, or blue stones into carved jewelry are just some of the many ways archaeologists have observed ancient mining and technology. Next time you are in a museum—or even a jewelry stone—take a look around and think about where all those materials came from, and who was the first to discover how to turn it into something beautiful.

Obsidian traveled vast distances because it was such an important commodity that could only be found in certain places. In The Golden Thread: How Fabric Changed History, author Kassia St. Clair discusses the trade of fabric throughout the world and how that has impacted things like status symbols, warfare, technology, and cultural transmission. How do you think the clothes you wear impact your life? How about those in your community? The world? The impact of our reach is often much more extensive than we think.