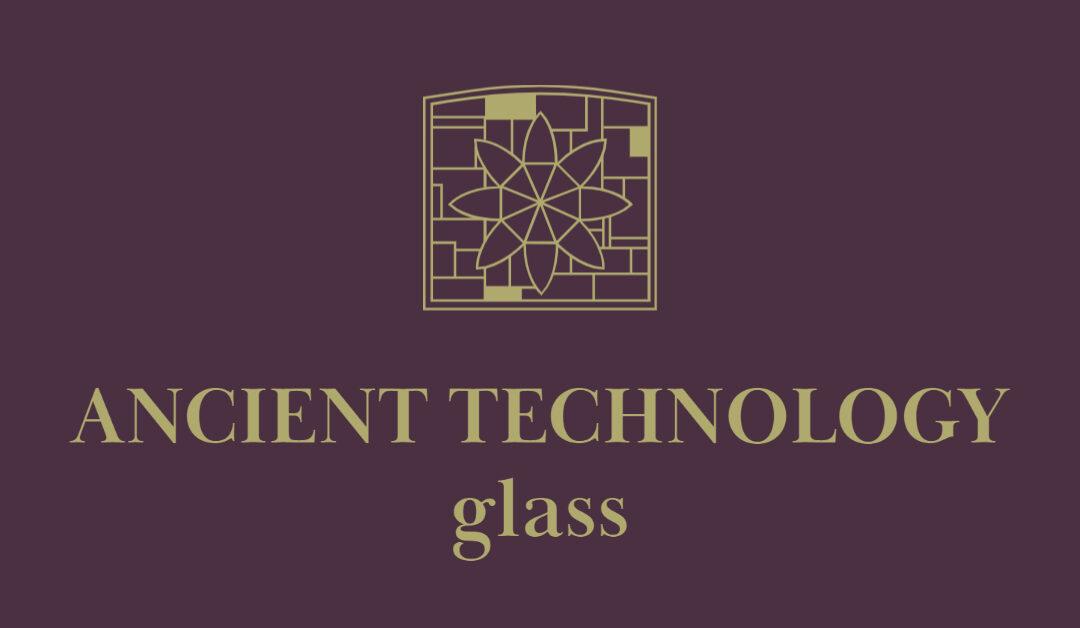 Glass is one of those things that you probably interact with constantly without realizing it. Take a moment to look around. How many glass things do you see? For me, windows, my phone and laptop screen, the fluorescents on the ceiling, my watch, and though it took an embarrassingly long amount of time to realize, but my glasses too. We interact with many other things that are made of glass, like your car windshield, maybe a wine glass at dinner, or a jar of jam in the fridge.

Glass has a very long history, and many different types of glass have been invented and worked with through time.

The archaeology of glass begins in the Middle East. Thanks to active trade routes, archaeologists are not sure where exactly glass was first invented. Most experts believe that Mesopotamia was likely the origin point for glass production, but the method quickly spread to northern Syria and Egypt. It is thought that glass dates back to between 5000 and 6000 years ago in this area, but the Middle East was not the only area to develop the technology. Archaeologists have also uncovered evidence that glass was being produced in India around four thousand years ago. 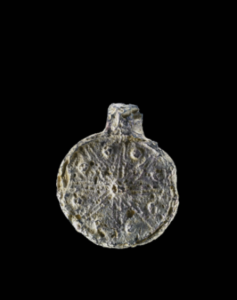 Ancient glass was not the clear and flawless product that our windows are made out of today. Some of the earliest glass objects were beads, and could be created in a variety of colors. There are not a great deal of these first glass products in the archaeological record, which is due to the rarity of the product and its fragility.

Most ancient glass was made with silica, which is commonly present in sand. Artisans would take the silica and combine it with other raw materials to lower its melting temperature since silica alone needs far too much heat to melt—approximately 1700 degrees Celsius. In addition to adding materials to lower the melting temperature, other materials were added to change the glass’s properties. Different materials could alter the color of the glass as well as its malleability, so the finished product could withstand being very thin or tolerate the weight of a larger thickness.

There is debate on where exactly glass was officially invented, but there are instruction manuals on how to produce glass that archaeologists have found in ancient Mesopotamia. These instructions were written in cuneiform on clay tablets around 3300 years ago and sent out to different parts of the ancient world. Glass also emerges in Ancient Egypt around the same time. Later, around 2000 years ago, glass making started in India. At first, archaeologists believed that the technology had emerged in India thanks to its trade ties with Mesopotamia. However, thanks to further excavation and study, most now believe that Indian cultures independently invented glass-making technology. Many sites have been excavated and show the deep knowledge these ancient artisans had at creating not only uniquely colored glass objects, but durable ones as well.

Though glass is now commonplace and inexpensive, it used to be an extremely valuable commodity. This was for a few reasons. The first is how different glass looked from 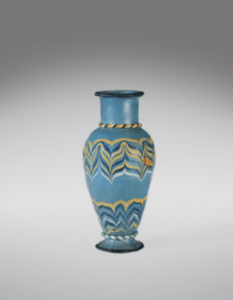 Egyptian Core Formed Vase from around 3000 years ago (Photo from Cornish Museum of Glass, accession number 66.1.213)

other precious stones. This difference in appearance made it special and valuable. Another reason for the high cost was the amount of labor it took to create. You may be familiar with things like glass blowing at Colonial Williamsburg or Jamestown, where experienced artisans dip long rods into a furnace, pull out glass, and shape it into a fully-formed object in minutes. This is glass blowing, and it is completely different from how glass was manufactured in the ancient world. The first challenge was getting all the ingredients together. This required glassmakers to combine sand and another material to lower the melting temperature and place it in a furnace to melt. This process would form the glass into chunks, and it would be sent to an entirely different location to be artistically manipulated into beads or other beautiful objects. This type of glassmaking went on for many years until glassblowing was invented around two thousand years ago.

Glassblowing is a technique first developed by the Syrians around 2000 years ago, around the same time as the Roman Empire. It is important because it made glass cheaper and more widely available for the lower class. No longer was glass only affordable to the highest social classes, but the faster and cheaper process made glass something that most regular people could afford to own. Blown glass, at the time, was usually reserved for making different kinds of vessels. Thanks to Roman trade routes, these glass objects traveled far and wide throughout the empire. Because glass blowing was less expensive and time-consuming, the practice spread around the Roman Empire and gained popularity as a craft.

Eventually, major cities became homes to glassblowing, and places like Venice became synonymous with producing this craft. The production of glass became so lucrative that glassblowers kept their skills and recipes a secret, only passing them on to their students. 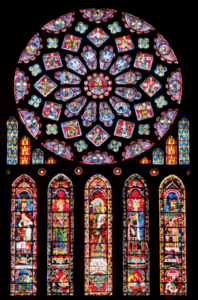 With time, glass continued to evolve and become a bigger part of daily life. Europe, in particular, has many famous works of glass, like stained glass windows. Stained glass was made much in the same way that the Mesopotamians did. Sand and wood ash were combined until melted. Different metals were added to create the rich colors. Glass was still not stable enough to produce massive panes, so smaller colored pieces were created to fit together in a lattice structure very similar to a mosaic. The earliest examples of stained glass are from the 2nd and 3rd centuries in England, though no examples have survived to today, and these were probably inspired by illuminated Roman works of literature. This art form grew in popularity alongside the spread of Christianity, and the most common examples of stained glass windows can be seen in cathedrals across Europe. The beautiful colors were rare for common people to see and experience. The way the light could change the color’s appearance seemed like the work of God, making stained glass an artistic as well as a religious expression.

Glass today is used everywhere, and technology has changed it to be used for many different things from the controlled shatter of your windshield to the enhanced durability of your phone screen.  Though used in many modern-day expressions, glass was a major invention of ancient cultures that changed artistic expression. Glass spread around the world as a valuable commodity. Even today, some of the most expensive pieces of art are glass works.

Just like glass, textiles are another ancient invention we often don’t think about today. Cloth, weaving, and knotting techniques are tens of thousands of years old, and glass is almost as ancient. Take a look around your office and home. What are other things you see that’s ancient origins are often overlooked? Let us know if you come up with something in the comments of our social media posts!