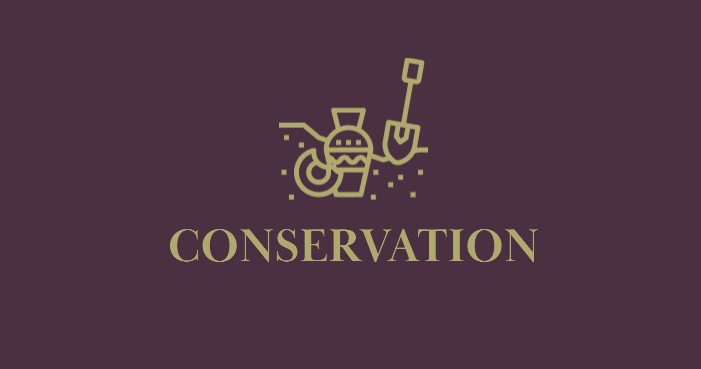 Conservation is an incredibly important process, but we often forget to talk about what happens after an artifact is taken out of the ground or before it is put on display at a museum. It is a very important step in the archaeological process since it can ensure a delicate artifact survives for future generations to learn from and study. 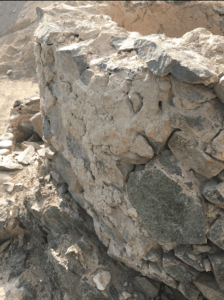 A wall crumbling from age and weathering

During excavations, artifacts rarely come out of the ground in perfect—or even good—shape. They are always covered in dirt, usually broken up into many different pieces, and they can be so fragile that they do not even support their own weight. There are a lot of different qualities that dictate how you treat the artifacts that are in need of conservation. Sometimes, professionals must come out to the field to stabilize the object with foam, cardboard, or even archival-quality glue.

Conservation is a highly scientific process that uses different chemicals and processes to preserve incredible works of ancient art. Not all artifacts are conserved, and this is for a variety of reasons. Some artifacts are in good shape and do not need any sort of stabilization. Other artifacts do not need to undergo such rigors since only archaeologists will see and study them. The artifacts that need conservation are treated based on their condition, material, previous environment, and the culture to which they belong. All these qualities dictate how and if they are conserved.

What an artifact is made out of may have the biggest impact on its condition once unearthed by archaeologists. Even seemingly durable materials like stone can become severely weathered and cracked while textiles, which are typically more fragile, can sometimes survive tens of thousands of years. Usually, harder materials like stone, metal, and bone survive the longest and need the least amount of conservation work. Harder stones, like granite, are not greatly affected by weather or temperature change; 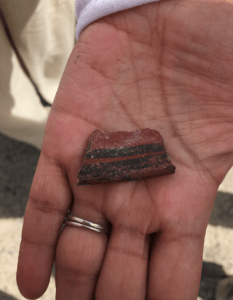 A ceramic sherd that has survived with the paint

however, other stone types, like sandstone, weather very quickly. Unfortunately, this kind of damage to design and carvings cannot be reversed.

Another type of material that usually survives is ceramics. Though complete, unbroken pots are rare to come by, pottery sherds can be very common discoveries in an excavation. Sometimes, archaeologists can even piece items back together, like an ancient pottery puzzle. Ceramics consist of clay and other additions like small rocks or plant matter that undergoe a chemical change when fired at high temperatures. It is this process that allows ceramics to survive a very long time.

Some materials, no matter how stable the environment, are more likely to disappear. Textiles and other organic materials break down far faster than inorganic materials, like clay or stone. This is because organic materials can act as food for animals and insects, they quickly rot away when they go through wet and dry periods, and they can be torn or easily ripped up. This is why archaeologists work extra hard to preserve artifacts made from organic materials. These artifacts can not only provide valuable insight to the culture of the people and time period, but also into the technology available at the time for weaving, dying, and fabric production.

The environment an artifact is left in also plays a huge role in how well it is preserved. Generally speaking, the more stable an environment, the better it is for preservation. This holds true for environment types you may not think of—like underwater. Unstable conditions in temperature, humidity, sunlight, and other things are what damage an artifact the most because they force change. For example, temperature fluctuations from hot to below freezing can cause water within stone to contract and expand, leading to cracks that can destroy a carving. Heavy rainfall and intense sunshine can breakdown even the toughest of fibers. Humidity change can cause metals to degrad away. 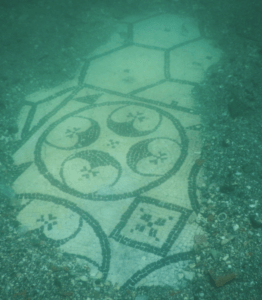 A mosaic that has been beautifully preserved, even though it’s underwater

Stable environments, even if extreme, don’t cause these harsh changes and allow artifacts to last much longer. Look at Egypt. Though intensely hot and sunny, the consistent conditions and lack of moisture allow mummies to be so perfectly preserved some appear to have only died a few years ago instead of thousands. Peat bogs in Denmark, though acidic and wet, are stable enough to preserve mummies so well that scientists can study what their last meal was. Shipwrecks are able to be well-preserved underwater because the ocean floor is a fairly stable environment in terms of temperature or acidity change.

In addition to the environment and material type, the culture responsible for the artifact itself also dictates how well and long it is preserved. Some cultures go out of their way to ensure their remains last as long as possible. The Ancient Egyptians were one culture that did this, as they built tombs and created a method for preserving bodies of the deceased people to last for eternity. This process of preserving the body and different goods to go with it was an incredibly important part of their religion. Another culture that did their best to preserve the dead and their belongings were the royal Inca, who believed their dead rulers could communicate with the living to pass on wisdom and advice.

Other cultures preserved things by accident or without the express intention of preserving something far into the future. There are also many cultures that actively worked to not have their objects be preserved at all. This idea can be  seen in several of the many different Native American groups in the United States and Canada. One specific example is totem poles, found in the Pacific northwest. Totem poles are a form of carved art that can express things like ancestry, history, or spiritual connection. They are usually carved from wood and stand outside of buildings. As wooden objects on coastal areas, they are subjected to precipitation, wind, and big temperature changes, so they do not take very long to break down and fall over. This natural process of returning to the Earth is an important part in the overall life cycle of the totem pole itself. Preventing this return goes against that lifecycle.

There are many different components that help or hurt an object’s survival through hundreds or thousands of years. The job of a conservator is to assess the damage, understand the best and most sustainable way to stabilize the artifact, and create a plan for its long term care. This highly scientific and precise occupation is vital to the study of history, since without their work the artifacts would not last long after excavation. This job along with preservation is what we will cover in this new blog series.

Our book for this new series is Dirt: The Erosion of Civilizations by David R Montgomery. It is a fascinating read that we will begin to unpack next week. Before opening this book, take a moment to think about what survives the ages and what doesn’t.

How do surviving artifacts impact our perception of history? How do you think our understanding of people or culture would change if more textiles survived? Or more letters? Have you ever considered how incomplete our version of history is without these more perishable items?