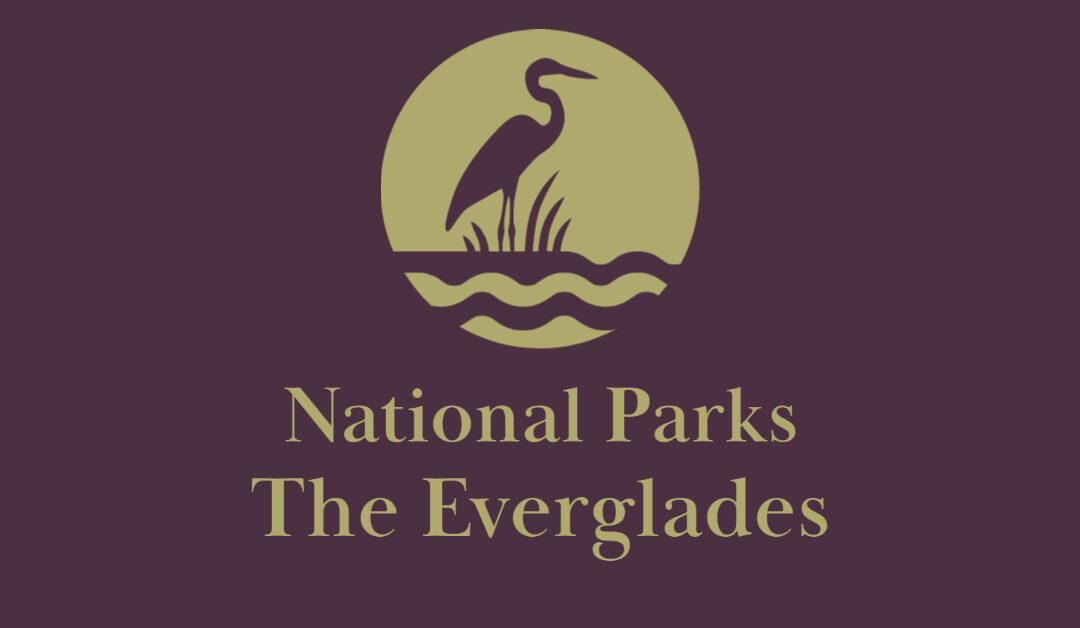 Dark-stained, shallow waters with grass as far as the eye can see is one of the signature views within the 22nd National Park. The Everglades are well known for how its unique, fragile, and incredibly biodiverse ecosystems. In addition to the incredible environment the park protects, the Everglades served as a home to many different Native American cultures where they thrived for thousands of years.

An egret in the Everglades

The Everglades may look like a giant marsh or swamp at first glance. However, the environment within the park is incredibly complex. There are nine main habitats in the area, and these range from thick forests to mangroves to a sea of grass. The forest area has large shade trees and requires wildfires to maintain a healthy habitat. The mangrove systems in the park are very dense, and they grow in the space where salt and freshwater meet. These mangroves are important for the survival of many animal species in the park, from birds who live in the trees to the small fish and young sharks that use the sheltered area as a nursery in which to grow and learn. In-between forests and mangroves are slow-moving rivers that weave their way down into the ocean. These rivers are very slow-moving, and they help create salt marshes and grass prairies. The grass is so abundant in this area, that it has been dubbed the “river of grass” with plants that can grow several meters tall in just a foot or two of water.

This diverse ecosystem houses hundreds of animal species. In the water, there are fish, turtles, frogs, snakes, crocodiles, and manatees. Wading through the waters are different types of birds, like herons. There are also many larger animals that live in the area, like deer, raccoons, and panthers. Everglades National Park offers important protection for these organisms, many of which, like the Florida panther, cannot live anywhere else.

Many people have the misconception that the Everglades is not and never was a habitable environment. This is certainly not true, as many different people and cultures made the area their home. There is archaeological evidence in the form of shell mounds that suggests people had lived in the area 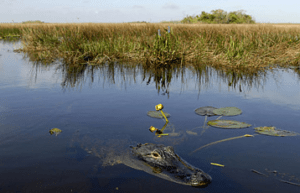 for thousands of years.

The peoples and cultures that lived and thrived within what is now the Everglades fished and relied on strategic foraging for food and other resources. People were able to use animals and plants to create different tools. For example, tools to scrape or hammer were created using local wood and shells. Shark teeth and other bones were also used for tools, while shells could be used to make jewelry.

Things that couldn’t be made into tools were put in areas that eventually became shell piles. These piles were created deliberately, so they could be made into the foundations of villages. These shell deposits were also used to create mounds, platforms, and canals. Other shell piles contained trash and waste, but these are called middens. 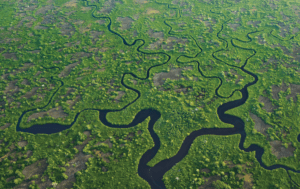 An aerial view of the Everglades

The Calusa lived in the Everglades since approximately 1000 BC. One name this region was called was “Pa-Hay-Okee,” which means “Grassy Water.” There is an abundance of archaeological evidence of their thriving culture from architecture made out of shells, different tools, artistic carvings, and trails for canoes to follow. The rivers served as channels for hunting, and the Calusa lived on the coastal areas. In addition to the Calusa people, the Creek people also lived in the Everglades later in history. More and more people began moving into the Southern Florida area, and this movement forced the Creek people out of their homes and land, and they began to live in what is now the Everglades. The Creek started living in the Everglades area in the 1700s, and were later known as the Seminole.

In the 1800s and 1900s, many people began looking to the Everglades as a resource area for hunting. The increased level of hunting at this time led to the extermination of several different and important animal species. In the later 1900s, people shifted their focus from hunting to turning the area into farmland. Companies started to drain the landscape to make it suitable for agriculture. All of these efforts, as well as the growing city population, intruded on the landscape. This resulted in about half of the historic range of the Everglades begin destroyed.

With this destruction, however, came efforts in preservation as well. These efforts began, and around two decades later, the Everglades National Park was established in 1947.