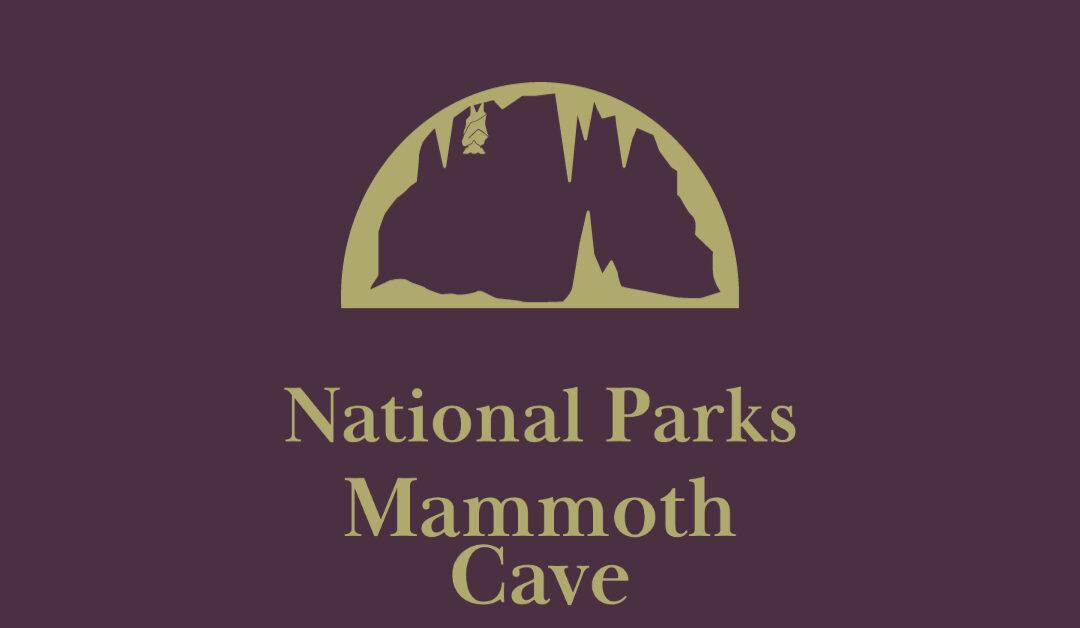 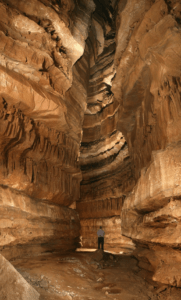 Mammoth Cave National Park is located in Western Kentucky and is the worlds longest known cave. There are hundreds of miles of mapped cave passages, but the full extent of the cave system is still unknown. Though the name can be misleading, there have never been any mammoths found in the cave. The name instead refers to its sheer size.

Mammoth Cave National Park took millions of years to form into the cavernous expanse it is now. It is a solution cave, which means that it was formed by traveling rainwater. Rainwater would soak into the soil, which would make it acidic. As the acidic rainwater seeped further into the soil, it would reach the limestone bedrock and eat away at it. Eventually, the water corroded enough bedrock away to form small channels that water could flow through freely. The continuous flow of water only further widened the channels until they were large enough for people to walk through. This process takes a very long time. Scientists believe that it took millions of years for the acidic rainwater to create the first, small water channels.  After these were formed, it took another few million for the water channels to become as large as they are now.

This National Park doesn’t just have a long geologic history. Humans have been exploring the cave system for thousands of years. Archaeologists believe 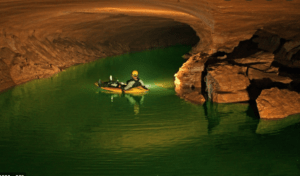 that people have been in what we now call Kentucky for as long as 12,000 years. However, it was not until around 6000 years ago that people begin exploring the different cave entrances and tunnels. This was during the Late Archaic and early Woodland time periods when most were hunter gatherers.

More recently in time, around 3000 years ago, is when people began actively mining within the caves, in addition to exploring. The cave walls had soft minerals on them, like gypsum, mirabilite, and epsomite. People used mussel shells from nearby rivers to scrape the walls and collect the minerals, but archaeologist are not sure for what the minerals were used. Some believe that they could have been used as medicinal cures while others believe they served a ritual or ceremonial function. These ancient miners discovered around 19 miles of passageways. To navigate the confusing passages, the miners inscribed maps or messages in pictographs and petroglyphs upon the walls. 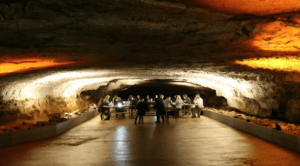 The caverns at Mammoth Cave

People stopped mining in Mammoth Cave around 2000 years ago, though archaeologists are not sure why. Some theorize changing culture and traditions meant they no longer needed the minerals. Today, there are seven different nations associate with Mammoth Cave: the Shawnee Tribe, the Eastern Shawnee Tribe of Oklahoma, the Absentee Shawnee Tribe, the Chickasaw Nation, the Cherokee Nation, the Eastern Band of Cherokee Indians, and the United Keetoowah Band of Cherokee Indians.

Around three hundred years ago, settlers moved into the area. These settlers had large farms and enslaved people worked on them in the early 1800s. For some living and working nearby Mammoth Cave, they worked as the very first tour guides. For example, Steven Bishop, an enslaved man, worked in the caves giving tours for almost twenty years from 1838 to 1856. He is believed to be the first person to go beyond the “Bottomless Pit” landmark and see the unmapped areas beyond what had been previously explored. He gained his freedom in 1856, and he continued to work at Mammoth Cave as a guide. Some visitors commented that he was “almost as widely known as the Cave itself.”

Though human activity had been happening in and around the cave for thousands of years, it was only in 1924 that the Mammoth Cave National Park Association was formed. Its primary goal was to make the cave system a national park, and 17 years later in 1941 the park was created. In addition to being a National Park, Mammoth Cave is also a UNESCO world heritage site as well as a International Biosphere Reserve.

Today, Mammoth Cave National Park hosts around two million visitors a year, and over 500,000 of them going inside the caves to get a closer look at different geologic and archaeological features. It is Mammoth Cave’s impressive structures and fascinating history that make it a must-see National Park.