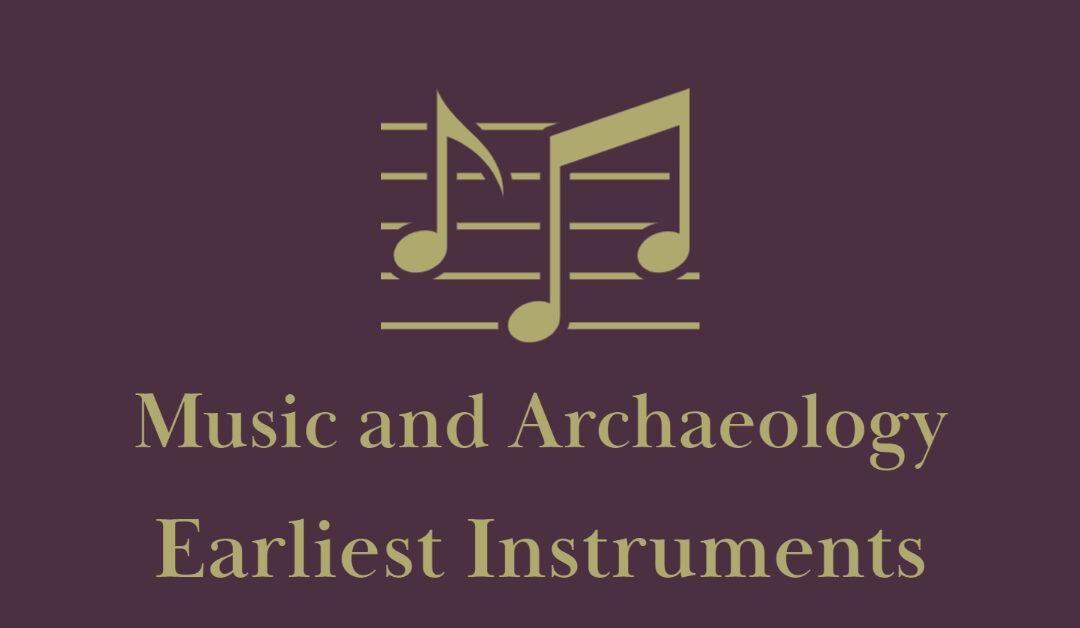 It is hard to imagine a world without music. In the modern world, it is rare to be in a place that is truly quiet. Music is always in the background of movies and videos, it is played in public spaces like elevators and stores, it is blasted in workout classes, and many turn it on in the background as they study, read, or just hangout. 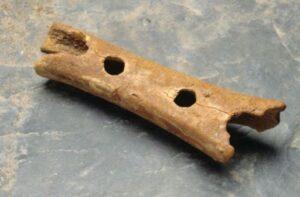 Artifact that was once thought to be a flute

Though archaeologists are always working to uncover new artifacts and information, it seems that music created with musical instruments may not have existed before around 40000 years ago—or at least not music we would recognize today. This is based on what is found in the archaeological record. However, the archaeological record is imperfect. Organic materials, like items made from bone or wood, break down over time—sometimes before archaeologists can find them. With this in mind, it is completely possible that instruments go back far later in history than 40,000 years or that people created music  by singing, clapping, or by some other means.

There is debate about which artifact holds the title of “oldest musical instrument.” In 1995, archaeologists found the femur bone of a young cave bear with holes in it. The holes 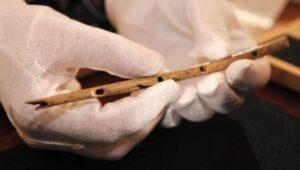 Ancient flute made of bird bone

appeared to have been made deliberately with pointed stone tools and was declared not only to be an ancient flute, but the oldest musical instrument. It was even recreated with clay and given to a professional musician to try out.

However, since its discovery in 1995, the artifact has been studied and analyzed by many who are not convinced the holes were made deliberately by humans or human ancestors. There is new research that suggests this artifact is not a Neanderthal-made instrument, but the product of animals. It is now thought that the “flute” is actually just evidence of hyenas scavenging the remains of young cave bears. Scientists believe these young animals had soft bones, soft enough for hyena teeth to easily make clean puncture holes that resemble deliberate, man-made ones. Though no one knows for sure, most experts in the field now see this artifact as scavenged bone, not the world’s 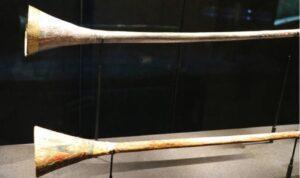 oldest musical instrument. Though this artifact from Slovenia may not be the oldest, there are many other examples of ancient instruments in European caves that are very similar in age. Some of these flutes are made of mammoth ivory are believed to be around 40,000 years old. These flutes were found in caves that also had other important artifacts such as jewelry, figurative art, and other kinds of imagery. These discoveries suggest that the site was once an important religious ritual area, and the flutes could have been used in some kind of spiritual act.

Music and instruments can be found in almost all cultures around the world through time. It is a uniquely human form of expression, and science shows that music isn’t just for fun. Playing music can be used as a form of communication, and it can even aid in the development of social relationships.

This series will look at music through time, focusing on instrument types each week. Next Friday, we’ll take a look at percussion around the world.